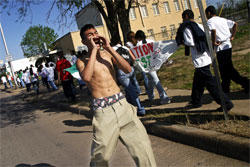 (Take a look at the ‘Marching for rights’ photo story in the Slideshows section of the website!)Hundreds of high school students gathered in downtown Fort Worth Tuesday afternoon to protest laws that could limit the number of illegal immigrants in the United States.

Carrying intertwined Mexican and American flags and signs with messages such as, “U.S. builds walls, U.S. will fall,” and “Â­Viva la Raza!”, students from all over Fort Worth, mostly Hispanic, walked the streets from the federal building to the courthouse.

The protest, like many others across the nation in the last few weeks, was in response to proposals to crack down on illegal immigrants.

Susan Hanvey, a security officer for the Oil & Gas/Commerce Building on 7th and Throckmorton streets, was outside the building watching the protests.

“I’ve seen at least seven busloads of students let off around here,” she said. “I’ve also seen every cop I’ve ever seen on a bike out in the crowd today.”

County sheriffs, Fort Worth police officers, security officers and traffic control officers lined the streets, many of which were partially blocked off, to help keep the protests peaceful.

While no large-scale violence occurred, protest screams from students gathered on the lawn in front of the Tarrant County administration building could be heard from blocks away.

Last school year, 54 percent of students in the Fort Worth Independent School District were Hispanic.

Laura Rios, a sophomore at Arlington Heights High School, said she and some of her fellow students left school after third period. She said she had to get picked up and brought downtown because the school had closed the gates to keep students inside.

“The gates didn’t stop students,” she said. “They just walked out.”

Barbara Griffith, the communications director for the FWISD, said she was disappointed students were leaving the schools during the day. She said there were at least 100 students from Polytechnic High School at the downtown protest at noon, and more from other schools that followed.

“We recognize that everyone has a right to make their views known,” Griffith said, “but not at the expense of missing valuable classroom time.”

She said students will all be expected to make up any missed work.

Rios said although she got a ride, there were students who walked from Arlington Heights High School, located at Hulen Street and Interstate 30, to downtown.

She said she and her peers were protesting for the rights of family members and friends who are in the country illegally.

“Just look around here,” she said, pointing to the intersection at Main and Weatherford streets. “Look at who the construction workers are.”

Alvaro Luna, a freshman at Tarrant County College, said he heard about the protests from his cousin, a student at Arlington Heights High School, and from the news.

“The U.S. government wants to try and keep us out (of the country),” Luna said. “But good thing we are here.”

Luna said he didn’t understand why laws should require illegal immigrants to work so extensively to get a visa and become a U.S. citizen.

His sign, which read, “This Latino country just ain’t the same without us,” was rolled up under his arm.

“They won’t even let us hold up the signs,” Luna said. “One cop told us, ‘Just go home. We don’t want you here.’ But it’s important for people to see us and hear what we have to say.”

Jeannet Sigala, a graduate of Trimble Tech High School in 2005, said the walk-out is a way to voice their opinions.

“We are just here to make a better life for ourselves,” Sigala said. “I think everybody deserves a second chance.”

Three Fort Worth police officers at separate downtown locations during the protest refused to comment.

According to The Associated Press, there are 11 million illegal immigrants in the United States.

– Ryan Wilcox contributed to the report.

(DON’T FORGET to take a look at the ‘Marching for rights’ photo story in the Slideshows section of the website!)