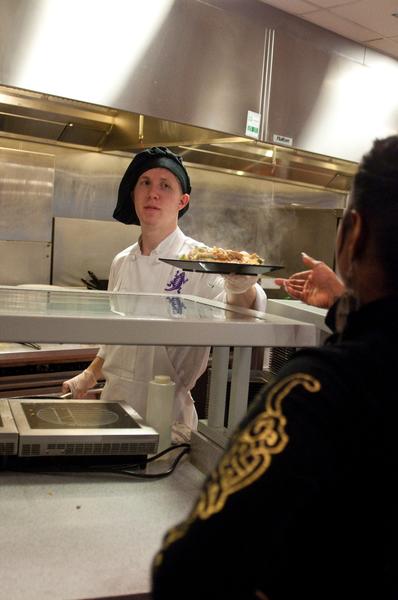 To improve food for students, foods such as the hummus, mashed potatoes, marinara sauce and salsa will now be made on-site at Market Square, he said.

“What we’re trying to do is veer away from constitutional cooking,” Guajardo said. “We’re trying to make homemade, fresh foods for the students.”

Freshman business major Erin Terry said she has been a fan of Market Square, located in the Brown-Lupton University Union, since she got to TCU and that she had noticed the improvements. She said she enjoyed Market Square even more with the new options, such as stir fry and homemade foods.

“I’m pleased to hear that they are starting to make foods in-house,” Terry said. “It makes the BLUU seem less like a cafeteria.”

Sodexo employees, including Guajardo, meet with the TCU Dining Services committee every week to discuss potential changes. The move toward in-house preparation, however, is one change that will not go away, Guajardo said.

“It is something that should have been done before,” Guajardo said. “As a matter of fact, we’re going to implement more [changes].”

Sodexo’s District Marketing Coordinator Kelly Raw said the effort toward homemade, higher quality food was a result of the change in management in October 2010. Stephen Miller, a 25-year Sodexo employee, became the general manager in October and immediately saw things that could be improved, Raw said.

Every employee in Market Square is certified under a Food and Drug Administration program called HACCP (Hazard Analysis & Critical Control Points), and goes through a program specific to Market Square called “Pride Stride”, he said. Both programs promote the cleanliness and safety of dining facilities through classes and certification, he said.

Freshman biology major Tanner Campbell said he was generally pleased with the food in Market Square and that he planned to purchase the same unlimited meal plan next year. Campbell said he did not know about the employees’ cleanliness training requirements but that he was pleased to hear about them.

“It’s definitely a good thing,” Campbell said. “It makes me more comfortable seeing the food prepared or knowing it is prepared here.”

Guajardo said other recent changes in Market Square included smoking brisket and chicken on-site. He said he also had a list of all the food Market Square prepares and that he was in the process of deciding which foods were feasible options to be prepared in-house.

Guajardo said students and customers would see more foods being prepared in-house and that new options would likely be offered in the near future.