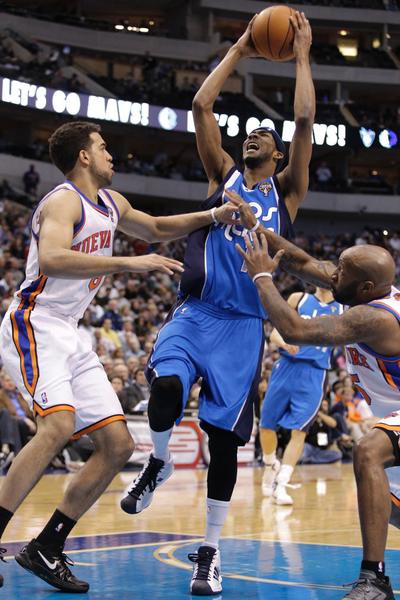 Dallas Mavericks head coach Rick Carlisle said newly-acquired forward Corey Brewer fits the continuity of the team and likes what the guard can do offensively. With 12 games remaining before the playoffs and with the Mavs a game behind the Los Angeles Lakers for the No. 2 seed in the Western Conference, the Mavericks are only 3-4 with Brewer on the roster. But the jury is still out on the true impact Brewer could make during a playoff run 8212; he has only averaged 8.9 minutes per game as a Maverick as Carlisle works him into the rotation.

After the trade deadline in late February, ESPN.com reported that the New York Knicks would buy out Brewer’s contract to make him a free agent. San Antonio, Boston and Oklahoma City were other interested suitors for the forward’s athleticism and defensive reputation, but the Mavericks quickly signed the 25-year-old former Minnesota swingman to a three-year, $7 million contract. Although most of the buzz surrounding Brewer focused on the potential defensive boost he could give the team after Caron Butler’s probable regular season-ending knee injury, Carlisle talked about what Brewer, who averaged 13 points and 3.4 rebounds last season, could do on the offensive end.

“I talked to him about how well he fits our team,” Carlisle said. “I like his progress, and he’s a great runner. I like what he can do, and offensively, he makes things happen.”

Carlisle talked about the offensive talent he expected from Brewer, but the ex-Timberwolves player has a tough defensive mind, too. The forward had 11 games with three or more steals with Minnesota this season. He also had 27 games with 10-plus points, including 18 points and five steals against Atlanta.

“I just try to play hard,” Brewer said. “I try to bring some energy to the team and make things happen.”

Carlisle said the team was fortunate to pick up a guy who can get stops when needed.

“I think he likes what our team looks like and has an opportunity to help us this year,” Carlisle said. “This is one of those situations where if we can get a guy who can get one stop at the right time, it’s a good move for us.”

As the playoffs are soon to arrive, the Mavericks are looking forward to the skill and depth Brewer brings to the team.

“He’s active, long and I like playing with him,” Terry said.

“He’s definitely an asset for us. I look forward to seeing big things out of him on both ends of the floor. Defensively he gets after it, and offensively his length and ability to get to the basket is what we like.”

The NBA’s second-place all-time assists leader, Jason Kidd, added his assessment of Brewer and how much of a difference-maker the three-year pro can be on the hardwood.

“He’s been great for us,” Kidd said. “He’s active, athletic and so far he’s been a big plus for us when he’s on the court.”

“He’s a different kind of player than we have,” Carlisle said.

“He’s a wing player who’s long, athletic and very fast. He played on two national championship teams, so he knows how to win.”