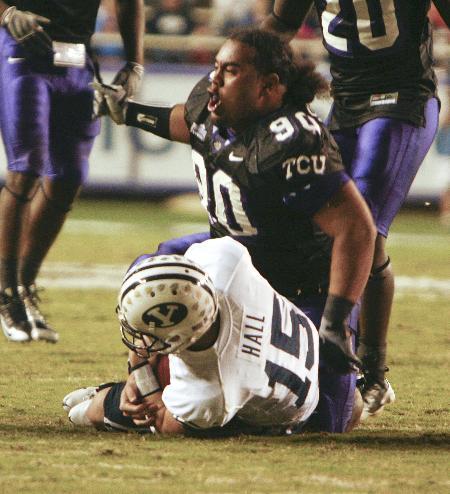 Editor’s note: This story was revised for accuracy Friday 1:11 p.m.

“I thought our coaching staff did a good job of prepping our kids, and our guys came out and played hard tonight,” head coach Gary Patterson said. “BYU has been the top team in our conference the last two seasons and our guys have been focused on them since January.”

Just three weeks after yielding 35 points to a high-octane Oklahoma offense similar to that of BYU, the Frogs sacked Heisman-trophy contender Max Hall six times, picked him off twice and forced three fumbles, two of which were lost, from the Cougar quarterback. BYU’s offense, the nation’s eighth-best entering the game, finished with 297 total yards, just 23 on the ground, and failed to record a touchdown pass for the first time this season.

“They were fast, and they got to me,” Hall said. “The bottom line is they were strong, and they forced me into some bad decisions. I thought I had been fairly good at handling the pressure, but tonight it just got to me.”

“The secondary did their job,” Hughes said. “They were prepared tonight and they made us, as a defensive line, look really good.

“I feel like the defense definitely has a swagger that we can pride ourselves on. Our motto for this year is ‘suffocate,’ so we try to come out there and play hard every snap.”

The Frogs’ offense, revived by the return of sophomore quarterback Andy Dalton, accumulated 410 total yards, 240 of which came on the ground. Dalton finished 12-for-19 with 179 yards and his first two touchdowns of the season.

“We prepare every week for each one of our opponents,” Dalton said. “We had a great week of practice this week and it showed out there.

“I was able to come out to show that I could still play.”

“It was frustrating because TCU was so effective on third downs and we weren’t,” Mendenhall said of the Cougars’ worst loss since 2005. “We just weren’t able to perform at critical moments in the game.”

“We prepared for it against Colorado State, but we didn’t want to bring it out too early if we didn’t need to,” Kerley said of the play, which currently has no name. “We have been working on it for a while now; we just felt that this would be a good time to use it.”

That play brought the 36,180 fans into attendance to an uproar, and both the players and coaches fed off of that energy created by the fans throughout the rest of the game.

“We have some great fans,” Kerley said. “It feels good to look up and see the stands full of people. It fuels us. Our fans kept us going.”

TCU vs. BYU in photos