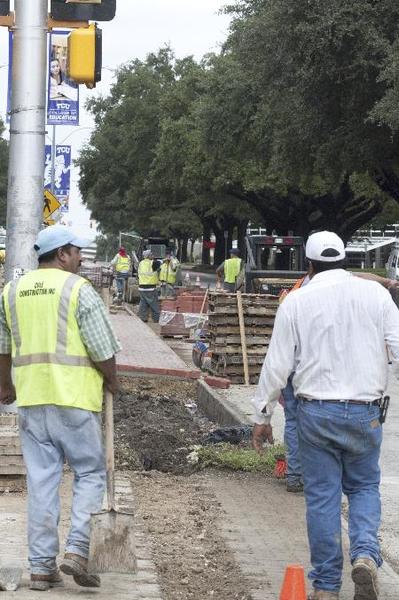 Trucks, traffic cones and dirt piles make up the landscape on the median that is under construction on South University Drive.

Harold Leeman, associate director of major projects at the university, said the goal is to make the median more attractive.

"Generally we are making the median look more like TCU," Leeman said.

He said the project includes putting in more pavers for students to walk across. Rose beds will also be added to the median.

Robert Sulak, director of landscaping and grounds, said the cost of the project is about $45,000. Sulak said that although the property is city property, it is also part of the university. He said the city approved the plan for the median.

Leeman said the date of completion depends on weather and unforeseen obstacles, but the project should be done by the end of the month.

Andy Viehman, a junior economics major, said the changes will benefit the campus.

"The construction in general that they're doing right now is really good because it will make our school look a whole lot better. It makes more people want to come here," Viehman said. "Actually, (the median) could look really cool, because it was just a dead bunch of grass. Some flowers there would definitely be an improvement."

But not all students are happy about the construction. David Lawson, a junior business major, said the project is a waste of money.

"I just think we spend a lot of money on the way our campus looks, and the flowers get changed out all the time anyway," Lawson said. "I think (the money) could go towards scholarships or something more useful."

Preston Patry, a junior political science major, said he would rather see the money spent on athletics.

"Why not make (Amon G. Carter Stadium) awesome?" Patry said. "We all care about football, and nobody cares about flowers in the median. The flowers are all going to die with the exhaust anyway. Flowers and exhaust don't mix."

Others hope the new pathways will ease foot traffic.

"I think it's good because it helps make the campus pretty, and a lot of people are crossing the street all at once, so I guess it gives people more places to cross the street," said Kelly Parcher, a junior business major.