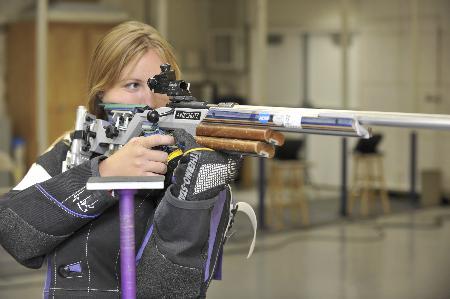 The width of a hair. That is the difference between absolute success and abject failure in the sport of rifle.

Practicing in a plain, single-story, whitewashed building that looks like it houses air conditioning units rather than athletes, the members of the women’s rifle team have been preparing for the biggest match of their lives at the first ever TCU-hosted NCAA championship.

This weekend, the Horned Frogs will put up their best shooters on their home turf in an attempt to win it all.

In theory, rifle is a simple sport. Shoot as close to the center of the target as you can.

The team scores are made up of two separate events: air rifle and smallbore. Air rifle consists of a shooter standing up 33 feet from the target, which is roughly the size of an Oreo, and shooting 60 shots.

Each shooter has an hour and 45 minutes to complete the air rifle portion.

Shoot the center of the target (about the size of the period at the end of this sentence) clean off, and score a 10. Shoot just a hair off of the period and receive a 9. Mere fractions of an inch more will push the score into the 8 or 7 range. Miss the Oreo and get nothing.

The combined score of the team’s four shooters is added up and added to the four-person smallbore score.

In smallbore, the same targets used in air rifle are placed 50 feet away from the shooters. The shooters are given two hours to take 60 shots, taking 20 in three different positions: standing, kneeling and prone. In the prone position, the shooters lie flat on the ground. The targets move down depending on the position. Scores are still expected to be in the same neighborhood as air rifle.

The best score of a team’s combined performance in the two events wins the team championship.

The top eight scorers in each discipline move on to the individual finals. Each participant gets 10 total shots. Highest score wins the individual championship.

Coach Karen Monez, a member of the Army Reserve’s rifle team for more than 20 years who’s in her fifth year as head coach, said rifle is all about muscle memory and fine tuning, and the key to success is gaining some swagger from countless hours spent gazing down the sight of a rifle.

“You have to have confidence and self-discipline to excel at this sport,” Monez said.

“A lot of shooters have what you call a shot plan,” Sullivan said. “You go through and write a long list of what you want to do for every shot. Then you pick four of five you want to focus on.”

“If you shoot a bad shot you can’t think about it,” Sullivan said. “You have to figure out what you did that was inconsistent and move on.”

The gear is also of the utmost importance and varies from shooter to shooter.

“Our guns are extremely adjustable; you adjust your gun to fit you,” said junior team member Emily Paper.

The guns lack any sort of scope, as the shooters rely on old-fashioned iron sights.

Each member of the team also wears a heavy shooting jacket and pants.

The jackets, which look like large lead vests from the dentist’s office, are used to stabilize the shooter and insulate the heart rate.

Footwear also plays a role in stabilizing shooters in the all-important sport of millimeters.

“Our shoes have no arch in them,” Paper said. “They look like ski boots. They’re not flattering outfits, but they get the job done.”

While the team is composed of all women, rifle is actually a co-ed sport where men and women go head-to-head.

Often, the team rosters are eclectic. The University of Kentucky’s team is made up of five men and five women, whereas the United States Military Academy’s team is composed mainly of men. The Horned Frogs are the only all-female team competing in the championships.

Monez said that rifle had been a club sport at TCU since the 1960s, but became an all-women’s team recognized by the NCAA for the 1991-1992 season.

Monez said the university received this year’s rifle championships, because the university has a twelve-lane shooting range and electronic targets to judge the competition, she said.

The targets use microphones situated around the Oreo-sized target to judge the placement of the shot through the black target paper. The reading from the microphone is then passed through a computer program and posted on an electronic projection of the target.

Smallbore will be held at the rifle range, which hosts a diminutive spectator area. The air rifle competition will be held in Daniel-Meyer Coliseum with ample room for spectators.

Monez said although rifle doesn’t get as rowdy as a basketball game, it isn’t necessarily as subdued of a spectator sport as people think.

“In the finals when they start reading off each individual shot, the spectators clap,” she said. “There’s definitely some spectator input.”

Air rifle: Shooters stand 33 feet from the target and shoot 60 small pellets while standing straight up. They have an hour and 45 minutes to complete the event.

Smallbore: Shooters are positioned 50 feet from target. Shooters take 20 shots in each of three different positions with .22-caliber bullets – 60 shots total. Positions are standing, kneeling and prone (lying flat on the ground). Height of target adjusts to be at eye level of shooters. Two-hour time limit.