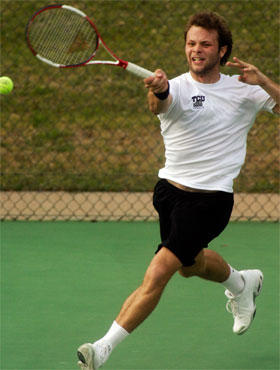 The No. 32 ranked men’s tennis team fell to No. 26 California Monday afternoon by a score of 5-2, moving its record to 7-6 overall while California moves to 10-4. The Golden Bears were able to get a head start by winning two out of three doubles matches. California’s John Pettit and Daniel Sebescen beat TCU senior Jacopo Tezza and freshman Kriegler Brink 8-2.

TCU was able to even the contest as sophomores Andrei Mlendea and Cosmin Cotet defeated Lennart Maack and Dean Wallace 8-5, but California eventually took the point as Tyler Browne and Conor Niland beat the No. 33 doubles team of Rafael Abreu and Jordan Freitas.

The Frogs did not fare much better in singles play, as California won the first three singles matches to seal the win.

The Frogs ended the afternoon on a high note, however, when Tezza came back from a 1-6 first set loss to win the second set 6-3 and was eventually victorious in the tiebreaker (10-2).

TCU head coach Joey RivÂ said he felt like the doubles point loss might have stayed on the minds of the players during singles play.

“I think it bothered us too much,” RivÂ said. “I felt like we played singles bummed out because of the doubles (loss). We’ve got some young players. A lot of those things are experience.”

The Frogs will participate in a double-header Wednesday versus Wichita State at 2 p.m. and Abilene Christian at 6 p.m. at the Bayard H. Friedman Tennis Center.