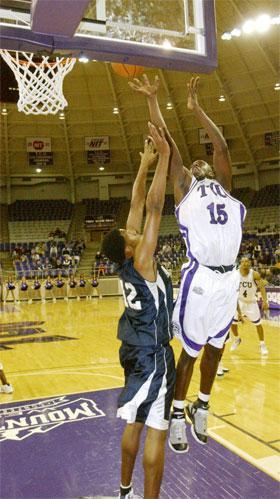 The Frogs scored only four points in the first three minutes of the game, but led at halftime 39-33, shooting 29 percent from the field.

The Frogs made 13 of 19 free throws in the first half, compared to Jackson State’s two of four.

Sophomore guard Brent Hackett said the team has been shooting free throws every day after practice to improve.

The Frogs continued to struggle with shooting in the second half – shooting only 36 percent from the field.

“We pressed a lot offensively,” Dougherty said. “Defensively we were making plays tentatively. We were adamant about not fouling, especially in the last 10 minutes of the game.”

In the second half, the Frogs had 27 offensive rebounds, while Jackson State had only six.

With five minutes left in the game, junior forward Art Pierce came up with a big offensive rebound and shot to give TCU a six-point lead, 67-61.

After struggling in the first half, Hackett scored seven of TCU’s last nine points. He hit a 3-pointer to tie the game at 70 with just under two minutes left in the game, then made a jump shot to give TCU a 74-72 lead.

“I took what they gave me and made the jump shot, and I was lucky enough to get the blocking call to shoot the free throws,” Hackett said.

Jackson State guard Clinton Johnson scored 24 points for the Tigers but failed to get off a shot before the buzzer sounded to end the game.

Dougherty said the team needs to work on being patient and gaining control of its game.

“This team is still not found,” Dougherty said. “We have to re-earn our success and momentum,” Doughtery said.

Hackett said TCU has only played two games and it has a lot more practicing to do.