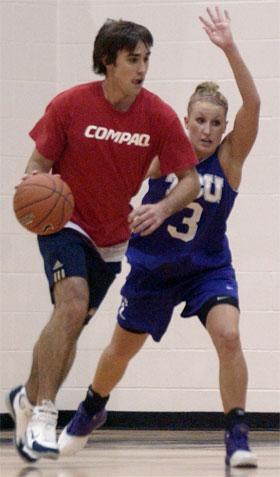 “Obviously, their size and speed help us to prepare for some of the best teams in the country,” Mittie said. “When we get closer to games, we’ll use them as kind of a scout team, having them run the opponent’s offense.”

The guys on the practice squad do not take their job lightly.

Sharon became a member of the practice squad because of his friendship with junior guard Natasha Lacy. A lot of these players are picked just from being in the right place at the right time or knowing someone closely associated with the team.

Even though the men are just out there practicing, Mittie said they have to go through the same things his team does.

“They have to be eligible just like our players,” Mittie said. “They have to go through Clearinghouse and the whole NCAA certification process. We also like them to have some high school basketball experience.”

Mittie said the guys are there five to six days a week for about an hour and a half.

Austin Galifaro, a sophomore education major, said practicing with the team has helped him out too.

“This is helping me stay conditioned,” Galifaro said. “I’m staying active. We get a little bit of free practice gear, too.”

With guys and girls competing against each other, there is always a chance of something embarrassing happening. Mittie said it usually happens a couple times a year. Junior forward Ashley Davis recalled one incident in particular.

“Just the other day, I kind of blocked this guy’s shot pretty bad,” Davis said. “Now, every time I see him on campus, I just give him a little wink, and he just puts his head down and keeps walking.”

Sharon said that although nothing like that has happened to him yet, if it did, it wouldn’t hurt his pride in any way.

Sharon’s humbleness is a quality Mittie expects the guys to have. They have to realize they are out there to make the team better, he said.

Davis said the guys do a great job of helping the team get better and improve.

“They really bring aggressiveness,” Davis said. “They can out-jump us and are stronger than us, so it makes us just work harder and get used to playing aggressive. We like to talk mess to them and get them playing even harder, so it’s definitely competitive. They know they’re there to make us better”

The relationship between the practice squad and the women’s team extends beyond the practice gym, Davis said.

“We know each other on and off the court,” Davis said. “They love being here. They’re at all our games, and they really look out for us.