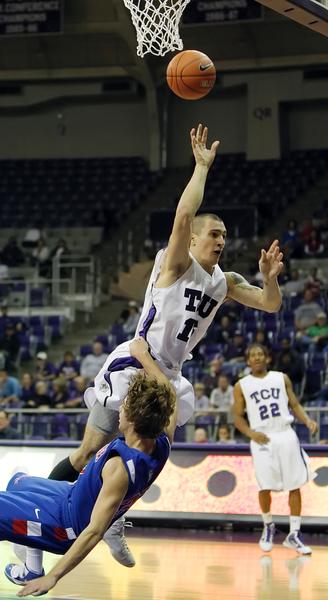 In just a few weeks the men’s basketball team will start its season in the same place they ended last season, ranked No. 7 in the Mountain West Conference.

This season the frogs are followed by Wyoming and Air Force in the basketball preseason rankings. San Diego State University and Brigham Young University lead the MWC in No. 1 and 2 spots, respectively.

Head basketball coach Jim Christian said his expectations for this season is the same as they are every year, for the Frogs to compete for a conference championship. He said he is excited for the potential his team has this year.

“Our team [is] coming together early,” Christian said. “We want to be a team that’s obviously improving but is competing for a conference championship.”

Christian said if the team keeps performing in the same way they have in pre-season practices, the Horned Frogs have a chance to compete for the MWC title. He said the motivation for this season is to not only win the conference championship, but also play in the NCAA championship.

“If you set out to do anything else, I don’t know if you can have the type of basketball team that you want,” Christian said.

Sophomore forward Garlon Green is expecting his team to fight for each other and fight for wins.

Athleticism and more players will help the team reach that goal, Christian said. This season the team has a strong mix of both new and experienced players.

Green said the older players will help guide the younger players and teach them the college basketball system.

Freshman guard Jarvis Ray said his older teammates help him fix his own mistakes and teach him what he is doing wrong. Ray said he has learned from both their mistakes and accomplishments.

“If I’m not in the game, I’m watching them playing,” Ray said. “When it time for me to get out there, I will be ready.”

The Frogs took their motivation to the first game of the season on Tuesday and defeated Rogers State 70-53 in an exhibition game. The Frogs officially begin season play Nov. 12 at home against Jackson State.