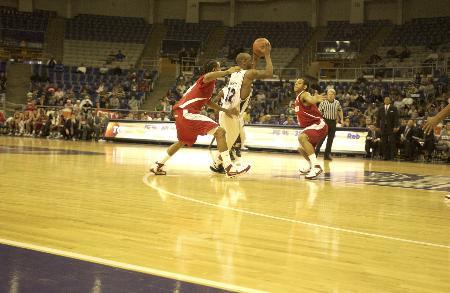 The Horned Frogs look to win their second straight game when they face the Utah Utes tonight.

Utah is currently No. 5 in the Mountain West Conference, and when the teams met earlier this season, the Utes beat the Horned Frogs 74-58.

Head coach Neil Dougherty said the Horned Frogs are preparing for what he calls the “Mountain West deluxe.” He used the term deluxe to describe the size problems the Utes create.

“Utah’s size causes issues defensively like no other team does in the Mountain West Conference,” Dougherty said.

Utah is a long team, with three of its top players listed at more than 6 feet 8 inches tall.

Dougherty said defending the 3-point arc will be extremely important this game.

In its last meeting, Utah shot .519 percent behind the 3-point arc, connecting on 14 compared to the Horned Frogs’ four 3-pointers.

The Utes easily topped TCU in the assists category, dishing out 23 compared to TCU’s four.

Utah’s sophomore guard Luka Drca came off the bench to lead the Utes with 10 assists, handily improving his season average of 3.6 a game.

Going into this game, the Horned Frogs are one game above .500 and have four games left before the Mountain West Conference Championships.

TCU needs to win at least three of its remaining games to end the season at .500 in the conference.

Senior guard Neiman Owens said the Horned Frogs are adding more emphasis this game on getting the ball to the hole.

Mitchem said the Horned Frogs always play a lot better at home, especially when a decent a crowd is in the audience.

“If we have a crowd here, we will have a bigger chance to win,” Mitchem said.