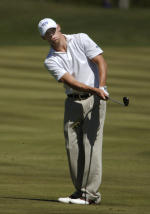 The 2010-11 schedule for men’s golf was revealed on Tuesday afternoon, which featured 10 tournaments around the country and the Mountain West Conference Championship matches in Tuscon, Ariz.

The nationally-ranked Horned Frogs will begin their season on Sept. 26 at the PING/NCAA Preview.

The Frogs – who finished with the fourth-ranked schedule a season ago – will once again square-off against the best collegiate competition in the country beginning with the prestigious PING/NCAA Preview in September. This will be the second straight season that the Frogs have participated in the PING/NCAA Preview, which will be held at the Karsten Creek Country Club in Stillwater, Okla. – the home of the 2011 NCAA National Championships.

In their second tournament, the Frogs will travel to Palm Springs, Calif., for The Prestige at PGA West, which TCU has triumphed in each of the last two seasons. The Frogs will conclude the 2010 fall campaign at the Isleworth Collegiate Invitational in Orlando, Fla., during the final week of October.

The Frogs will begin the 2011 spring campaign in a familiar site as TCU will travel to Hawai’i to take part in the UH Hilo Intercollegiate on Feb. 2. TCU will close out the first month of the spring season in Jacksonville, Fla., as part of the John Hayt Collegiate Invitational.

March will prove to be the busiest month of the year for the Frogs as TCU will participate in three tournaments with all coming during a 12-day span. The Frogs will first tee-off at the Las Vegas Invitational before finishing up at a pair of tournaments in Arizona. The first Arizona tournament will be at the Desert Shootout in Goodyear followed by the National Invitational Tournament held in Tucson.

The Frogs will compete in the State of the Texas for the first time of the season in April as TCU will travel to Austin for the annual Morris Williams Intercollegiate held at the UT Golf Club on Apr. 4. Prior to heading to the Mountain West Conference Championships, TCU will travel to The Traditions Club in Bryan, Texas, on Apr. 16 for the Texas A&M Aggie Invitational.

The Frogs will conclude the 2010-11 campaign at the Mountain West Conference Championships, which begin on May 5 at the Tucson National Golf Resort in Tucson, Ariz.