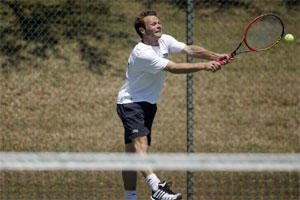 Just off an upset win over No. 13 LSU, the TCU men’s tennis team is looking to keep its undefeated record when it takes on No. 61 South Alabama at 6 p.m. today. Head coach Joey RivÂ said that in spite of the No. 32 Frogs’ big win Sunday, the team has to work hard to earn a victory over the Jaguars.

“We always have a tough schedule,” RivÂ said. “Every match on there we can lose.”

“We have to take one match at a time,” Tezza said. “We have to focus on what we are doing, not what we have done.”

Juniors Andrew Ulrich and Radu Barbu agreed that rankings are not the team’s focus entering this match.

“We had a tough match against (lower-ranked) UTA, but we beat No. 23 Texas Tech easily,” Barbu said. “For now, rankings are not important. In April it will matter.”

Also lingering on the team’s mind is last year’s loss to South Alabama.

RivÂ said this year he hopes the Frogs will “get a little revenge” on the Jaguars, who have lost two matches thus far in the season.

Tezza said the match against the Jaguars, at 6 p.m. tonight at the Bayard H. Friedman Tennis Center, will be very different from Sunday’s match against LSU, which has a talented team that serves and volleys. Southern Alabama is a team of fighters – it uses its scrappiness instead of a more refined serve and volley game, he said.

Although he declined to comment on exactly who will be playing where, RivÂ said players’ positions will stay close to the same.

TCU will be playing three new men that arrived in January and three players who have been here longer, RivÂ said.