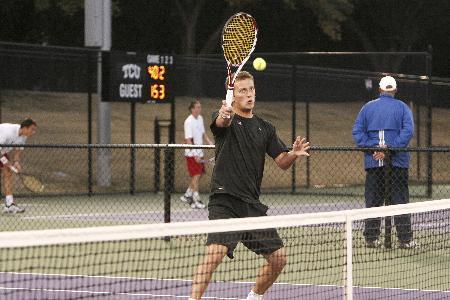 Even though sophomore Zach Nichols lost his first set to Southern Methodist University’s Chris Hooshyar on Wednesday night at the Bayard H. Friedman Tennis Center, it looked as if the No. 43 Horned Frog tennis team already had the match in hand.

But SMU players battled back to make the match close and Nichols’ three-set, come-from-behind victory (4-6, 6-1, 6-4) ended up being the decisive match as TCU won 4-3.

“I was a little nervous. It was a relief to win my match, personally and for the team,” Nichols said. “Both the team and I have struggled a little bit recently, so it was great to seal the win.”

After Nichols lost his first set, TCU (3-7) still looked in control of the match. Four of the six Horned Frogs won their first set, and the team had the doubles point in hand after winning two of the three doubles matches. But SMU (7-7) fought to close the gap. With the outcome of the match in the balance, Nichols won both his last two sets as his teammates cheered him on to clinch the victory for TCU.

Head coach Dave Borelli said getting the win was nice, but he would have liked to win more comfortably.

“We started off strong but we started to struggle later on,” Brink said. “But it was great to play at home and have friends and fans and to know our courts. It was fun to win and now we have something to build on.”

The doubles team of Emanuel Brighiu and Adrian Simon and the team of Nichols and Price both won their matches.

The win is the first time TCU has beaten SMU in three years, Borelli said.

“These are the kind of matches you win after a tough schedule,” Borelli said. “Now we’d like to garner some wins. Winning solves all problems.”

The Horned Frogs play their next five matches at home starting with No. 63 San Diego on Friday and the University of Texas at San Antonio on Saturday.