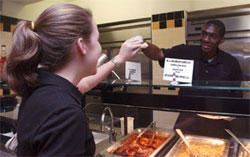 The menu includes Surf-n-Turf, recipes from home and Saturday steak night, and it is not at a local five-star restaurant. It is at The Main.The Main recently introduced a new twist on the dining choices for students who dine on campus.

Legia Abato, the marketing manager for TCU Dining Services, said the choices are going to alternate every night.

“We have had such a great response to the remodeling restaurant style of Pond Street Grill that we have decided to incorporate some different features at The Main during the week,” Abato said.

Sunday night is the carver’s combo station. The carver combo comes with carved meat, choice of vegetables, steak fries, roll and beverage, all for $10.99.

The Student Government Association decides on Tuesday night’s menu. Last week was Hispanic-themed in honor of Hispanic Heritage Month, and this week will be State Fair-themed, complete with turkey legs and candied apples.

Edens will be open Wednesdays during the evening hours.

“Edens is usually open only during lunch hours; now, hopefully, more students will choose to dine on campus because of its availability,” Abato said.

Thursday night is Surf-n-Turf. Students can get prime rib steak, fried shrimp, vegetables and a roll for $13.99.

Friday night will be a rotation of home-style recipes, and this Friday will feature a fried chicken special.

In comparison to local restaurant features like the Surf-n-Turf, The Main is doing a surprisingly good job, said Rockfish restaurant chef and manager Raymond Nunley.

“We have the steak and shrimp combo, and it is $16.33,” Nunley said. “The special comes with an 8-ounce sirloin steak, five grilled shrimp, and choice of two vegetables or french fries.”

Nunley said some TCU students come in to the restaurant, but he would like to see more.

“We offer TCU students a 15-percent discount, so hopefully more will start coming in to the restaurant,” Nunley said.

“I think the Surf-n-Turf special The Main is offering is a good deal for students who are on campus; for $13.99 a meal like that is a good deal,” Nunley said.

Vincent Perez, a chef in The Main who works at the Surf-n-Turf station, said he had a good night with customers trying the new feature.

“I have had a good amount of customers – about 60 students, and it’s still pretty early,” Perez said. “Mainly the guys purchase the prime rib, and the girls usually get the shrimp; it’s a good mixture.”

Zack Kays, a freshman premajor, said he gave the Surf-n-Turf a five on a scale of one to 10.

“I like the shrimp, and I have so much money on my meal plan that I am going to spend it here on campus rather than going out to eat all the time,” Kays said.

Preston Martin, a freshman finance major, said he would like to see TCU offer a portion of the meal plan that could be spent off campus.

“I think it would be good to have a certain amount that we get to spend at the local restaurants,” Martin said.

Kays agrees that he would enjoy spending his meal plan money at restaurants like Jons Grille and Fuzzy’s Taco Shop.