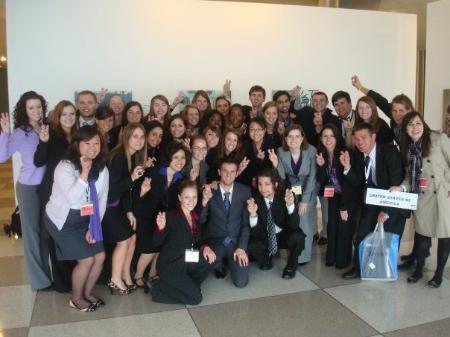 The university’s original 2003 team consisted of eight delegates and four alternates under the direction of Donald Jackson, Herman Brown professor of political science. Now under Cox’s leadership, the university sends groups of more than 20 delegates to two competitions each year as a nationally renowned team, he said.

Cox said the team’s growth and success during the years should be attributed to its returning delegates.

“At the beginning I was trying to shape the student expectations and push them,” Cox said. “Now, the student leadership that has been built up over time passes that on, and the students are the ones that drive the expectations.”

Karen Baumgaertner, a representative from the national MUN, said this year’s New York conference is at full capacity.

“The purpose of these additional conferences is to accommodate additional interest,” Baumgaertner said. “We have people coming to Washington D.C., Quito, Ecuador, and to Xi’an, China, and it’s in order to allow more international students the opportunity to participate because our New York conference is so consistently full.”

Baumgaertner said she believes the growing interest is partially because of schools like TCU that have teams that regularly receive recognition.

Cox serves on the National Model UN New York advisory committee. Advisors are nominated by their peers and chosen for their outstanding service to the program, Baumgaertner said.

Because of his involvement as an advisor and the team’s growing prominence at the conference, TCU’s MUN program was featured in promotional material for the New York conference, Cox said.

Student delegates go through a stringent application process before being admitted to the MUN program, Cox said. Applications for the following year, including essays and recommendations, are due in the spring.

During students’ first year, they must enroll in a two-semester class taught by Cox.

The fall semester focuses primarily on the workings of the U.N., Cox said. In November, teams are assigned the country they will represent at the conference. Then the team divides into pairs to begin research on their committee’s topic for the conference.

This year’s team will represent the Netherlands, Cox said. Twelve committees will research issues such as piracy, mining in war zones, world food and biofuel.

A smaller version of the program is available in the fall and does not require students to enroll for the preparation courses.

The conference is held in Washington, D.C., and participants can sign up without going through the rigorous application process of the New York conference.

Randle began her involvement in national MUN her sophomore year when she attended the conference in Washington D.C., she said.

“D.C. is supposed to be an educational experience for MUN, whereas in New York you are expected to know the rules, have your research done and be a lot more prepared,” Randle said.

Randle was also the leader of a student-run trip to a conference to Ecuador from Jan. 10 through Sunday. Eight delegates from the university attended the conference in Ecuador, Randle said.

At the Ecuador conference, TCU had its first delegate on a native language committee. Junior political science major Cynthia Arevalo will represent Chile in a Spanish-speaking session at the conference.

Because the team’s first international conference was held in China, none of the delegates from TCU spoke the native language.

“I’ve always debated in Spanish so I think it will be more comfortable for me,” Arevalo said. “You have to know a language very well to get up and speak your mind.”

About 20 of the 120 delegates at the conference were scheduled to participate in the Spanish-speaking committee, called Summit of the Americas.