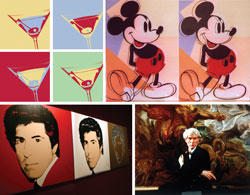 From colored-filled images of Marilyn Monroe to the Wicked Witch of the West, Andy Warhol has taken stunning photographs of famous people and places.Now, TCU will be able to give some of these pieces a new home.

The art and art history department will receive 150 pieces of art from The Andy Warhol Foundation for the Visual Arts in honor of the foundation’s 20th anniversary.

Warhol worked as a commercial artist from the late 1900s.

The Andy Warhol Foundation in New York City donated Warhol’s art to 183 colleges and art museums in the country, according to a press release from TCU Office of Communications.

TCU is one of four Texas universities to receive the art pieces.

“He is one of the most important artists of the 20th century,” Eaker said.

Ronald Watson, chairman of the art and art history department, said Warhol became one of the few artists in the late 20th century to be well known outside of the art world, because his work was a big part of cultural developments in New York City. Warhol was known for taking photographs of celebrities such as Elvis Presley and Marilyn Monroe and choosing unique colors to fill the images, making his printmaking process startling and famous, Watson said.

Eaker said the purpose of donating Warhol’s artwork is to give students an opportunity to see the works of Warhol in person. Watson said the artwork gives students a chance to study Warhol’s photographs directly, instead of just looking at copies.

Eaker said the foundation started with a long list of schools and tried to be as diverse as possible in selecting which schools to give the artwork to. He said they wanted to give to schools that did not already have Warhol pieces in their collections.

According to the press release, 28,543 Polaroid photos and gelatin silver prints of Warhol’s collection, valued at more than $28 million, will be divided among the institutions. Watson estimated TCU’s art pieces from the foundation to value about $150,000.

Jenny Moore, the program curator of the foundation, said this is the first time the foundation has donated pieces of Warhol’s work. Moore said she wants to donate to institutions that cannot afford Warhol’s pieces.

“Some people did not have the access to his photographic work,” Moore said. “We want to enable everyone to see his work.”

Moore said each institution will receive 100 Polaroids and 50 black and white prints. She said the institutions that were picked across the country had to have art galleries or museums and be able to care for the artwork and willingly display the images.

Watson said Warhol’s work will probably not arrive until January. He said the department plans to have a public exhibition of the pieces after they have been evaluated.

According to the Andy Warhol Foundation’s Web site, some of Warhol’s famous pieces include the “Campbell’s Soup Cans” and the “Marilyns.”