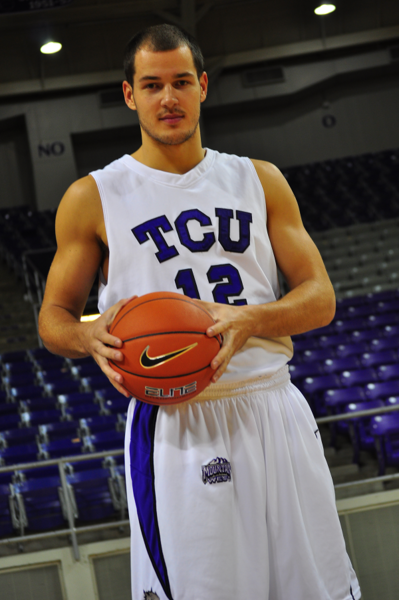 For Nikola Cerina, basketball isn’t just a pastime. The 6-foot-9-inch sophomore power-forward for the TCU men’s basketball team used his talent to transcend the war and violence that raged around him for most of his young life.

Cerina’s hometown, more than 5,800 miles away in Topola Oplenac, Serbia, has experienced one conflict after another since declaring independence from Yugoslavia in 1991.

“Growing up in Serbia, there were a lot of bad things going on,” Cerina said. “I’ve been through two wars so it wasn’t fun, but I managed to find some escape in basketball.”

Cerina said the relationship between Serbia and Croatia is slowly improving, but ethnic tensions and fierce battles in the region led to a mass exodus and refugee crisis in 1995 and a NATO intervention in 1999.

His journey began on a run-down court in Serbia and brought all the way to the Horned Frog court last season, but basketball has always been a part of Cerina’s life and it runs in the family. His older sister Jelena has won international acclaim and currently plays basketball at the University of Oklahoma.

“My father used to play, but then he got crazy in love with my mom and stopped playing,” he said. “It is kind of disappointing that he doesn’t play anymore but it happens.”

The strong bond between his parents helped the family face the criticism thrown their way because his mother is Serbian and his father is Croatian.

Cerina said he doesn’t remember much about the 1995 war between Croatia and Serbia because he was only five years old, but the NATO invasion he remembers clearly. He was in the third grade that year.

Even when Serbia was not under attack, Cerina said almost every other day there was a crisis, but his family never let the violence pull them apart. They went on with life as normally as they could. “My family is a group of people that I wouldn’t trade for anything,” Cerina said. “There is no such thing in the world, I’m not talking just about money, there is no such thing I would trade for. I wouldn’t even think about it.”

Though his family relationships were easy and natural, he often faced ridicule because of his mixed heritage, and in some areas he could even be attacked.

Hardships taught Cerina what was really important in his life. “That’s all I care about: family, basketball and friends,” he said.

A lifetime of channelling his energy onto the court paid off when Cerina was contacted about playing for TCU. After researching the university on the Internet and reading positive reviews about head basketball coach Jim Christian, he decided to make the trip to Fort Worth where he was the first international true freshman to play basketball for the Frogs.

Leaving his family was hard, but he said the team is like another family that has made him feel at home and he enjoys being in the locker room and practicing.

Cerina joked that across the pond he and Croatian teammate, junior Marin Bavcevic, might be enemies, but in Fort Worth, they became fast friends.

Bavcevic said that a shared language and the mutual experience of childhood wars made Cerina’s transition less stressful.

J.D. Pollock, graduate assistant for the men’s team, said Cerina brings energy to the team and the biggest change he has seen in Cerina since his arrival is his demeanor.

“Having the team around him and staff that really does care about him, I think he just feels more comfortable,” he said. “This is a new home for him, and I think he likes it quite a bit.”

Cerina said even after he arrived at TCU he did not realize he was good enough to play at a college level.

“I didn’t have the self confidence at the beginning of last year, so I didn’t think I was good enough to play,” Cerina said. “I just kept trying and practicing and the results came at the end of the season.”

Cerina’s transition from Serbian basketball to American basketball was not easy. The practices are longer, harder and the game much more serious and physical here.

“I mean God would just like knock me down; every third offense or defense I was on the floor,” Cerina said with a laugh. “It was tough. I was kind of weak, I’ll admit it.”

Cerina responded by spending extra time in the weight room and working individually with coaches to improve his play. Despite having a hard transition, Cerina said he quickly learned ways to make his job on the court easier.

“A lot of these guys are incredible athletes, which makes it hard to compete,” he said. “But every time you step on the court you know your opponent has some weak side, so you try to take advantage of it.”

After all these years of playing ball, Cerina still finds peace on the basketball court.

“That’s the thing I’m most happy about … I’m just excited to be on the court,” he said.