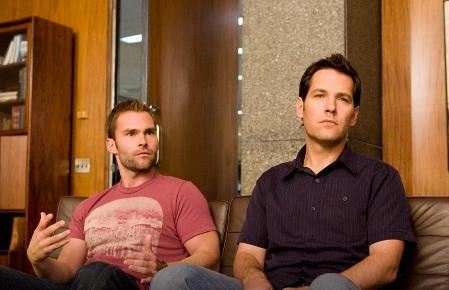 Energy drinks, live-action role playing games, boobs and the band KISS are some of the diverse topics covered in “Role Models”, a new comedy directed by David Wain. If this sounds like fun to you, then you might want to bond with Paul Rudd and Seann William Scott for about an hour and a half.

Paul Rudd stars as Danny, a man who is convinced that his work pimping Minotaur energy drink to schoolchildren as a legal alternative to drugs has no meaning. Small wonder. Seann William Scott plays Wheeler, his co-worker who loves his job because the only responsibilities are showing up on time in the Minotaur costume. Wheeler considers Danny a friend even if the feeling isn’t mutual.

After Danny’s breakdown leaves the two in legal limbo, they are faced with either jail time or 150 hours of community service for a Big Brother-like program run by a former crack addict played excellently by Jane Lynch. Maybe she could’ve used some Minotaur energy drink instead of blow.

Christopher Mintz-Plasse (McLovin from “Superbad”) and Bobb’e J. Thompson give solid performances as the “littles” Wheeler and Danny take care of. Both Rudd and Scott play characters that you feel like you’ve seen them play before, but like Mintz-Plasse, who basically plays a variation of his “McLovin” character from “Superbad,” can play that character very well.

If those faces look familiar, it’s because they have all starred in previous films like “Reno 911!: Miami” and Wain’s previous efforts “The Ten” and “Wet Hot American Summer.” Wain finds some familiar territory in dealing with childhood traumas and growing up, even if that applies to men who are approaching midlife crises. While “Wet Hot American Summer” addressed childhood traumas and the pains of growing up in an offbeat variation on 1980s summer camp movies, “Role Models” is his most commercial effort to date but it pays off comedically. Although the movie feels formulaic in finding that even “grownups” can grow up, the numerous asides and one-liners keep your mind off the sometimes predictable events.

It might feel like a Kevin Smith or Judd Apatow film, which can be a compliment or a curse to some. Both filmmakers make comedies that are raunchy and profane, but at the center are sweet and almost sentimental to their characters. This movie is a hard R, but at its center is redeeming without being schmaltzy.