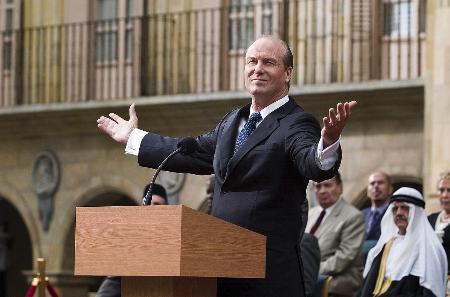 The idea for “Vantage Point,” appears intriguing on paper. Watching the assassination attempt of the president through the eyes of eight different people offers originality and seems to be a good idea for an exciting thriller. However, this is an idea that simply does not work when put into practice.

The audience is shown 20 exciting minutes of film, then everything gets rewound and the audience watches the same 20 minutes again but with a different main character. After watching the same events occur over and over again, the movie loses its thrill and becomes annoying rather than entertaining.

The characters are not intriguing either. So little time is spent on so many people that they all remain one-dimensional, and the audience never gets to know any of them. The only character who comes close to being relatable is the American Thomas Barnes, played by Dennis Quaid. Quaid does his best Jack Bauer impression as he plays a pistol-shooting, terrorist-chasing Secret Service agent who previously took a bullet for the president and still feels the effects of it.

Unfortunately, the climax was rather weak, as well. I will not spoil the ending for those of you who want to see it. I will simply tell you that America lucks out.

“Vantage Point” is an ineffectual thriller that attempts to be like “24” and the “Bourne Identity” in its originality, but fails in its ability to provide entertainment.