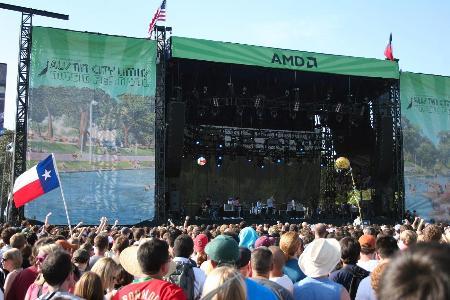 Imagine more than 100 of the world’s finest bands at Austin’s Zilker Park, each playing one of seven music stages and being cheered on by dedicated fans. The 350-acre park – slightly larger than the size of TCU’s campus – was able to contain tens of thousands of music lovers at the annual Austin City Limits music festival this weekend for three days of entertainment, local art and delicious food and drinks.

For the first time since its inception, the festival was pushed back to October in order to avoid the 100 degree heat that is characteristic of Texas in September. The plan backfired as audiences were free of the intense heat but had to endure rain and mud. Although the weather became questionable, that didn’t stop the crowds from enjoying the fun.

People came to the city ready to cut loose and cheer on bands, and there was no holding them back (the fact that the festival bars opened when the gates did probably didn’t hurt, either). Friday was the only day of the festival with clear skies and dry grass, and the sunny weather was reflected in the energy of the crowd.

Big name performers on Friday included Raphael Saadiq, Thievery Corporation and Them Crooked Vultures. The influence of the pop genre was evident in the night’s headliners, Kings of Leon and the Yeah Yeah Yeahs. The Kings surprised their audience by having Pearl Jam frontman Eddie Vedder join them for a tune, beating tambourines and stretching his vocals in preparation for his band’s headlining performance on Sunday.

Unexpected rain broke out over the park in the early afternoon. With all of the sunshine on the previous day, few people were prepared for rain, which allowed street vendors to grossly overcharge for plastic ponchos and umbrellas. The weather didn’t get listeners down though – people abandoned their less-prized possessions in the mud, stripped off their outerwear to keep movement simple and rocked out through the last set.

There was a bigger emphasis on funk Saturday with artists such as !!!, The Airborne Toxic Event, Grizzly Bear and Sound Tribe Sector 9 performing. Ghostland Observatory and the Dave Matthews Band dueled across Zilker as headliners. Matthews drew a larger crowd, but Ghostland drew a louder one.

The aftermath of Saturday’s rain left the park a muddy mess of footprints and abandoned flip-flops. Everyone was in better spirits on Sunday because the sky was clear, despite weather forecasts that predicted a day full of thunderstorms.

“We were ready to bust out ‘Singing in the Rain,’ but I guess we’re just gonna have to rock out,” Latin guitarist David Garza said.

Sunday highlighted more upbeat music, with a lineup consisting of English club-rock band the Arctic Monkeys, funksters Passion Pit and Ben Harper and Relentless7. Mashup and sample artist Girl Talk drew one of the biggest crowds of the night. Accompanied with streamers and confetti, the concert felt like a massive party. The artist and his laptops were joined on stage by roughly 100 audience members who danced and partied during his hour-long set.

Pearl Jam had the luxury of playing the only open stage from 8:00 p.m. to 10:00 p.m., and the band had the undivided attention of thousands.

Vedder scanned the park, taking in the muddy grounds and excited faces that stared back at him, and smiled.

“I’m not going home, personally, till I’m covered in dirt,” Vedder said. What a rock star.

Due to illnesses and personal difficulties, the festival had to free up spots that were originally reserved for Sonic Youth, Lily Allen, The Raveonettes, the Beastie Boys and Lisa Hannigan.

On the whole, the acts that were present put on excellent shows, but some acts fell short. Mos Def, known for his dynamic energy on stage, didn’t seem to live up to his reputation. The crowd didn’t give him much energy to feed off of, given that the transition from guitar-driven to rhyme-ridden music can prove difficult for audiences, but with 15 years of live performance under his belt one may have expected more.

Finally, this weekend could have done without the torrential downpour that occurred on Saturday, the resulting ankle-deep mud that crowds had to wade through on Sunday and the four University of Texas guys that spit at everyone trying to leave the Ben Harper concert to make their way to another stage (“Why would you – no, WHY WOULD ANYONE want to leave in the middle of a Ben Harper show?!”).

Dude, you totally have to catch …

Irish band Flogging Molly’s music is a unique blend of punk rock and traditional Irish folk, and the music inspired energetic moshpits and circles of Irish folk dancing, a winning combination that would be extremely unlikely at any other band’s show.

You have to love a guy with a tongue as sharp as frontman Dave King’s. His sarcastic banter flowed seamlessly between songs, a skill he must have perfected over the 12 years he has spent in the band. Despite his wisecracking, he showed true appreciation for the audience, genuinely thanking them for coming out to see the band even though it was pouring rain.

That was so epic I can’t believe it

Seeing three of the most renowned musicians of their respective decades collaborate on stage is a mind blowing experience. Them Crooked Vultures featured Dave Grohl (of Nirvana and Foo Fighters) back on the drums, John Paul Jones (bassist of Led Zeppelin) thumping out soul-vibrating bass lines and Josh Homme (frontman of Queens of the Stone Age) giving a taste of his excellent rhythm and strong vocals.

Best overheard dialogue exchange: a college-age guy, after tripping over a man old enough to be his father, apologized: “Sorry, I really just want to be closer to Dave Grohl!” The man’s reply? “Yeah, you and every other woman at the festival.”

The best part of this festival by far was seeing the less experienced bands excitedly take the stage and experience visible difficulty at believing the massive amount of energy brought forth by the crowds. The band that really embodied this was Phoenix, a pop-rock/electronica band from France. Their performance was high energy, and lead singer Thomas Mars told the audience that this was the largest crowd the band had ever played for. The seven consecutive “Thank yous” he delivered in the middle of the set and the 10 he delivered as he exited the stage were almost as endearing as the evident shock on his face when he walked into the crowd and saw the number of people whose hands were outreached to touch him.

It takes a lot of energy to spend three full days in concert mode, not to mention all of the going out that happens after hours (hey, it’s Austin, there’s always something going on). The effects are a lighter wallet, total fatigue, an intense migraine and serious neck strain, but consensus says it’s totally worth the money and depleted energy. Relax – you have a year to recover.