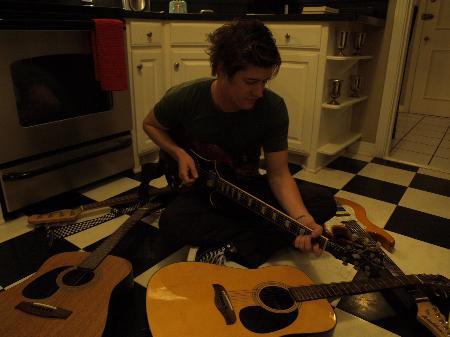 J. Mack Slaughter Jr. knows what it’s like to be an adult while an adolescent.

At 17, the Fort Worth native had accomplished fame with a career in a boy band. But he left the glitz and glamour of Los Angeles and returned home to pursue a career in medicine. Slaughter is now a pre-med neuroscience major at the university and has established the Zachary Music Foundation, a nonprofit organization that provides music lessons to adolescent patients.

Slaughter learned to play the guitar at the age of 12 with help from his father and sister. He said even if he is able to get one child interested in music and make it a centering passion of his or her life, it would be an achievement for his nonprofit organization.

Sitting beside his piano in his living room, Slaughter sounded jubilant as he discussed his childhood days. Dressed in a blue T-shirt, plaid pants and Converse shoes with his hair styled as if the wind had blown it from east to west, the 25-year-old musician looks like a young Elvis Presley.

An Elvis fan, Slaughter entertained his family and friends with the rock ‘n’ roll star’s impersonations and collected posters and memorabilia of “The King.” Slaughter laughed as he remembered his first performance, singing “Old McDonald” at the age of 3 on stage at Hulen Mall.

“Just being around a family that a lot of times communicates musically gave me an ear for it at a young age,” he said.

Marti Slaughter, his mother, remembers J. Mack Slaughter being the youngest in their family band, J. Mack and the Kids, led by his father. She said the family was happy to see their youngest member follow their musical footsteps. She laughed as she shared her stories about her son and his “froggie voice [low tone voice],” because of when he had to sing adult songs.

J. Mack Slaughter ran to grab his guitar from his bedroom and in an embarrassed tone, blushing, he sang the first song he wrote and composed when he was 13.

“It’s terrible,” he said as he sang: “Once I went to the moon/It was weird with no gravity.”

J. Mack Slaughter excitedly shared his days in the boy band Sons of Harmony, formed in 1999. Covering his face with his hands, in a low voice, he mentioned the song he sang at the audition for the band, the Backstreet Boys’ “I Want It That Way.”

The four-member band released an album and toured with artists like Destiny’s Child, Bon Jovi and Jessica Simpson.

“It was a real taste of independence at an early age,” J. Mack Slaughter said. “It made me grow pretty quickly in a good way.”

At 17, J. Mack Slaughter moved to Los Angeles to pursue a career in movies. He landed up in TV series playing characters like Keith in “Like Family,” and Kyle in “What I Like About You,” and a role in the movie “Fat Albert.”

However, he never left his love for music. He formed a band called Calendar and continued playing gigs in clubs like the Dragonfly and The Viper Room in Los Angeles.

J. Mack Slaughter always dreamed of having a career in the entertainment business and living up to his dream of becoming a star.

“I thought it was going to be a really simple path,” he said. “I thought I would take a regular road in music and play shows around and get signed.”

But while in Los Angeles working for his TV series and movie, J. Mack Slaughter was getting dissatisfied waiting for projects to come to him and rely on them.

“You have a lot of free time,” he said. “I have too much energy for that.”

With time, J. Mack Slaughter also realized that being in the entertainment business he had to focus more on his appearance and groom himself. When he broke his hands during skateboarding, he said it “took all those things away.”

This turned his life into a new direction. While he was volunteering at Cook Children’s Hospital in Fort Worth in 2005, he noticed a void in the lives of teenagers.

“I noticed that there was an age range between 12 and 17 who weren’t given as much attention,” he said. “Teenagers are desiring independence and in most cases wanting some feeling of accomplishment.”

J. Mack Slaughter didn’t see any potential in the video games and board games at the hospital for the teenagers. So he decided to step in and help them realize their goals through music.

“That’s when I wanted to turn it around and give instead of receive and wanted a career that was more selfless,” he said. “I can’t think of anything else that is as selfless, giving and challenging on a daily basis as medicine.”

His parents and sister, Lisa Slaughter, a registered nurse, supported him because they wanted stability for him and wanted to see him happy.

Lisa Slaughter said she talked to her brother about her work, how gratifying it is. Since she knew her brother was interested in biology and science, she encouraged him to go into the medical field.

Though her brother is burdened with studies, Lisa Slaughter said he still has time for music. She sees him as a sensitive man who writes songs for every emotional moment in the family.

For J. Mack Slaughter, writing songs and composing music is a stress-releaser and a breather during study hours.

Patrick Avila, J. Mack Slaughter’s friend, former band member of Calendar and a medical student at Stanford University, agreed. Taking time between their studies, they have been working on a music album, “The Triangle Knights.” He also said they discuss medical school and academics but never leave behind the topic of music.

“We talk in terms of music and even jam over the computer through Skype,” Avila said.

After a hiatus of more than four years, J. Mack Slaughter said coming back to school was “starting a perception of the world all over again.” Talking about the books he is currently reading, “The Brain that Changes Itself”and “I am a Strange Loop,” he says he wants to be a pediatrician.

J. Mack Slaughter sounded excited as he talked about his vision for his nonprofit organization. Though some paperwork and administrative formalities are still pending, he is working toward his goal, already collecting some musical instruments. He said he would donate them after the music foundation is in full swing. He is also thinking of other projects for the foundation.

Lisa Slaughter is helping her brother’s foundation. As a part of the Zachary Music Foundation’s purpose, she sings to some of the patients suffering from cancer at the hospital she works.

“Music is really therapeutic outlet for us and patients and their family,” Lisa Slaughter said.

Marti Slaughter’s voice cracked and she almost broke into tears recalling her moments at the hospital battling breast cancer and how J. Mack Slaughter and her daughters helped her gain strength through music.

“Music heals,” she said. “All I did was focus on the beauty of words, calm and hope that the songs portrayed.”

She recited the lyrics of the song he wrote for her, which is framed in the wall of her bedroom: “I will hold you in my arms when you’re old.”

She said her son’s words gave her the strength to fight cancer and grow old with her son and watch him succeed.

J. Mack Slaughter also wants to follow the path and implement his medical studies for a cause.

“In the future, I want to be able to fund research that connects the therapeutic value of music to medicine,” he said referring to an article titled “Music, Immunity and Cancer” written by a group of professors at the University of Santiago de Compostela in Spain. The study shows how music can reverse the adverse affect of stress on cancer cell proliferation.

He also mentioned his plan to fund cochlea implant surgeries, which would allow deaf people to hear.

But before that, J. Mack Slaughter wants to focus on his studies and work on his nonprofit organization because he wants the teenagers at the hospital to see life beyond the walls. He wants them to enjoy the smooth transition from adolescence to adulthood, which he himself missed.

In his music room in the backyard of his house, a small, studio-like room with guitars, drums, piano and a vibraphone, he holds up his guitar and plays the notes to a song, which he recently completed. He says it’s a song about missing an important phase of life and the sudden transition from his teenage years to adulthood. He gushed that he is enjoying his college life now and will be enjoying until 30, the age he will graduate from medical school.

And he sings: “I’m propped up/Until I have to grow up/An adolescent warrior until 30.”