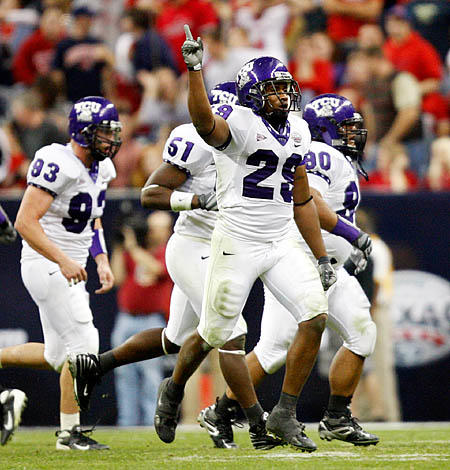 HOUSTON — A month and a half ago, the Horned Frogs (8-5) were looking for a bowl-granting sixth victory.

Senior safety Brian Bonner spoke up during a press conference Nov. 6 and said not getting an invite to a bowl game would be like watching friends go to a party while you would have to stay at home.

During the 2007 Texas Bowl at Reliant Stadium in Houston on Friday, Bonner decided to become the life of the party and the rest of the Horned Frogs followed suit in a 20-13 victory over the University of Houston Cougars (8-5). A performance capped with eight solo tackles and 65 yards of punt returns had the emotional backfield defenseman playing with a fire in the Texas winter.

Although Bonner was in the spotlight on defense and special teams, it was the grit of tailbacks Justin Watts and Ryan Christian that kept head coach Gary Patterson’s offense moving downfield.

Watts and Christian combined for 24 carries and gained 95 of the Frogs’ 146 rushing yards. Throughout the season, the running game for TCU had moments of glory followed by heartbreaking defeat.

The season-ending ankle injury to Aaron Brown gave new life to Joseph Turner and his strong rushing performances. Turner’s time at center stage was abbreviated during the Texas Bowl when he suffered a knee injury. But depth for the Horned Frogs came through again as tailbacks Watts and Christian were there to fill the gap with ease.

“Coach always said when a guy goes down you need someone else to step up and fill in,” Watts said.

Both Watts and Christian came to the Texas Bowl party Saturday night, but the entire team was invited to this fiesta.

Not to be left out from the celebration were wide receivers Walter Bryant and Ervin Dickerson. Both were on the receiving end for three of redshirt freshman Andy Dalton‘s passes.

The pair picked up 56 and 57 yards of receiving offense, respectively. Although neither made touchdown receptions, both kept the chains moving Friday night.

Dalton was in prime form and broke two single-season TCU quarterback records during the game. He broke Max Knake’s records for most completions and most attempted passes in a season. His performance under center earned him MVP Honors for the Texas Bowl.

The end of the first half had the Frogs walking to the tunnel down by three points, but a 13-3 second half led the team in purple and white to a Texas Bowl Victory.

A Dalton rushing touchdown up the middle tied the game with 10 minutes left in the half, but a late field goal by the Cougars’ T.J. Lawrence put Houston back on top.

The second half was led by the performances of Watts and Dalton.

“Early on, we were able to move the ball, but we just weren’t able to finish,” Dalton said. “Coming into the second half, that was one thing that we were trying to do – we were trying to finish drives, and get down there and score some points.”

After a rushing touchdown by Watts in the fourth quarter, the Frogs had a seven-point lead and the momentum going into the final minutes.

As the final quarter progressed, TCU widened the gap to 10 points. A 32-yard field goal by Lawrence put the Cougars within seven points with 1:57 on the clock. What unfolded was an epic finish before 62,097 fans in Houston.

An onside kick attempt was recovered in-air by Bonner giving the Frogs a chance for victory on the final possession.

“I wanted to go up on that front line, Bonner said. “With me returning punts, I’m used to throwing my head up and taking the hit.”

A three-and-out left 1:32 on the clock as the Cougars were starting the final drive from their own 2-yard line.

Houston quarterback Chase Keenum led a valiant drive into the Horned Frogs’ red zone with 14 seconds remaining. The Cougars had no timeouts left, but Keenum had a hot hand and an ability to scramble around while making off-balance passes the whole night.

“Their quarterback definitely made it exciting toward the end,” Patterson said.

But Keenum’s moment of glory had to come to an end, as Friday night was the Frogs’ party. With one second remaining and time left for one final pass, senior defensive end Chase Ortiz reminded the Cougar quarterback why not to crash the party. A punishing hit put an end to the 77-yard drive and the Cougars season.

“When we’ve needed a big play, Chase has been there and we’re going to miss him,” Patterson said.

Moreover, it made for a third consecutive bowl win for the Frogs and the eighth consecutive postseason failure for the Cougars.

It was time for the Horned Frogs to celebrate a new year and a start to a new young dynasty in Fort Worth.