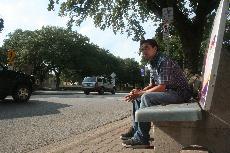 Maybe you are a freshman from far away. Maybe you are an environmentalist wanting to decrease your carbon emissions. Maybe you have been buying lottery tickets to no avail and can only scratch up $2.17 for gas money when a gallon is $2.59. Worry not, carless folk! Fort Worth not only has cowboys, stockyards and a blooming cultural district, but also a handy transportation system in order to see it all.

Part of the Fort Worth Transportation Authority, or the T, the city bus system has 38 routes that go from Benbrook to Richland Hills and everywhere in between. Joan Hunter, communications manager of the T, said students can take Route 7 on University Drive all the way to the Intermodal Transportation Center (ITC) downtown, where they can hop on the Trinity Railway Express or Molly the Trolley. All buses are equipped with bike racks and an eclectic group of daily commuters. Call customer service at (817) 215-8600 for help planning a daily route on the bus.

Price: Free with TCU ID and T transit pass, which you can pick up at the TCU Police station, Residential Services or the information desk at the Brown-Lupton University Union.

Toot toot! No, this isn’t San Francisco; it’s Funky Town. This early-20th-century look-alike trolley was named after Fort Worth’s mascot – a longhorn who supposedly watches over her fellow longhorns at the stockyards. The trolley circles around the main downtown attractions from 7 a.m. to 11 p.m., hitting up Sundance Square, the Fort Worth Convention Center, the Fort Worth Water Gardens and more. Hunter said this summer pilot service had such success that it is being extended to Thanksgiving, and perhaps longer if its popularity continues. So find one of the eight stops downtown and help Molly live on!

Price: Free for all

The TRE is the fastest way to get around the Dallas-Fort Worth area. It will take you to the DFW Airport, Dallas and other stops in the Metroplex. The transit pass is also usable for the Dallas transit system.

Janet Martin, a traffic administrator for TCU Police, said there are three shuttle routes that should come to any part of campus every 10 minutes, with at least one shuttle running from 6:30 a.m. to as late as 4 a.m. The shuttle, especially the late-night shift, is always a good place to make new friends to share Whataburger fries with. For shuttle routes and stops, go to the TCU Police Department Web site (www.cap.tcu.edu) and click on Transportation Services.

This is easy. Stand on the side of the road, stick out your thumb and hope for a friendly student to pick you up! Or try carpooling with friends.

Don’t forget about this two-wheeled invention. Sit on the seat, move your feet in a circular motion and off you go! Buy your own or contact Keith Whitworth, a sociology professor, at (817) 257-5941 or [email protected] to sign up for the Purple Bike Program, which gives a limited number of students a free purple bike for the semester to help reduce carbon emissions with fewer cars on the road and encourage a bike culture on campus.

So, yes! It is possible to be carless but not careless with money. Also, Hunter said using any of the transportation system services helps reduce traffic congestion and improve the air quality of our beloved town. For more information about the T and its systems, go to the-t.com.

View Around Fort Worth in a larger map