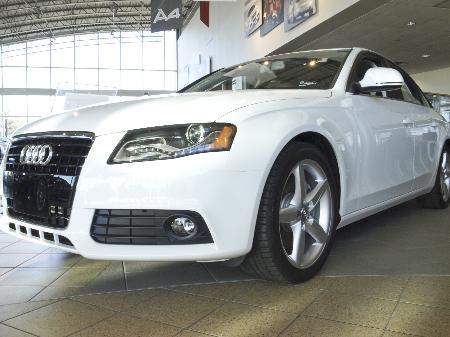 The 2009 Audi A4 may have the same name as its predecessor, but it is truly a different animal.

If you are lazy and do not want to bother reading the rest of this review, just read this: Go buy this car.

The new aggressive exterior and sleek lines of the A4’s body are impressive.

The only complaint I’ve heard about the new Audi’s looks are in regards to the small LED running lights that come with the xenon light package, a cue from the brand’s supercar, the R8.

But, enough about the outside – let’s talk about where Audi has really excelled as of late, and that is on the inside. Even at the lowest trim level the interior wipes the floor with almost all of its competition.

Everything is ergonomically placed and driver-oriented. Audi also gives plenty of options to customize the interior.

So both the interior and exterior of the new longer and wider A4 are brilliant, but how does it drive? Yet again, the new Audi is fantastic.

There is no ignoring the fact that the Audi is not a rear-wheel drive car, so it will never be the best driver’s car. But the A4 does not feel like your standard front-wheel-drive sedan.

The Quattro all-wheel-drive system sends most of the power to the rear wheels, so much so that it does feel reminiscent of rear wheel drive, but still provides the confidence to tackle any corner aggressively without fear.

Even though the all wheel drive system is very good, I would not recommend it except in a climate with frequent snowy or icy conditions.

The front wheel drive model offers better fuel economy and, based on my experience with Audi’s and Volkswagen’s latest models, the car will still handle brilliantly, just a little less tail-happy than a BMW.

The new A4 features sophisticated styling and great engineering and with its longer and wider wheel base the car drives better than ever.

The A4 has finally surpassed its competition, the BMW 328i, which is just not quite enough car to take full advantage of its rear wheel drive.

However, I do not consider the A4 as a competitor to the more powerful, twin-turbocharged BMW 335i.

The 335i’s more powerful engine puts the car in a different class, both in performance and price point.

That is what the soon-to-be-released Audi S4 will shoot for, and BMW could have something to worry about.

I don’t think any other car at this price point could be better.