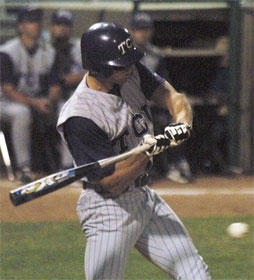 Recently, the NCAA changed the standard baseball bat used in college baseball, requiring baseball bats made with an aluminum composition, altering the way the balls come off the bats.

Jim Schlossnagle, head baseball coach for the Horned Frogs, said his team is getting used to the new way the ball comes off the bat, but thought last year’s design was perfectly fine.

“Not every college coach had a vote in the way this went down, which is disappointing,” he said. “There is some documentation of safety issues; I don’t believe that. I thought the bats we had last year were perfect for college baseball.”

The new bat is designed to make the sweet spot, the spot on a bat where contact allows for the best possible hit, much smaller than in previous years. The hope was to limit player and fan injuries as well as shorten the games to help fit a three-hour television window, he said.

Schlossnagle said he that he wouldn’t have voted for a change in bats if asked. He said that although he disagreed with the decision, every team in college baseball would have to make the same transitions as his team. He didn’t think the new bats would affect his teams game plan too much and said it would help out his already strong pitching staff at home, in what was already considered more of a pitchers park.

The last time a change in bat design was made was after the 1998 College World Series final, in which the University of Southern California and Arizona State University combined for an astonishing 35 runs. Schlossnagle said the design of bat used in that game was ridiculous.

Junior outfielder Jason Coats said his team is already familiar with the new bat design, having used it in practice since the end of last season.

“Stats might be down a little bit this year,” Coats said. “I mean, everyone’s going to have to play with them so I don’t think it’s going to be that big a deal.”

All hitters will have to do is keep their hitting mechanics in line, square up and hit the ball and their stats will be normal, Coats said.

Pitchers seem to be embracing the change in bat design.

Senior Trent Appleby, Horned Frog pitcher, said the ball doesn’t fly off the bats anymore, which was great for him for a number of reasons.

“The ball doesn’t carry as much as (it did with) the aluminum bat’s…they say it’s to make it safer, but it saves some home runs for me,” he said. “You can put the ball in the strike zone more and just let the [hitter] put the ball in play because it’s not gonna carry.”

When asked if his first pitch of the 2011 season will be right down the middle, Appleby laughed and shook his head no.

“I’ll definitely throw some more strikes, but you gotta keep them out of the middle,” he said.