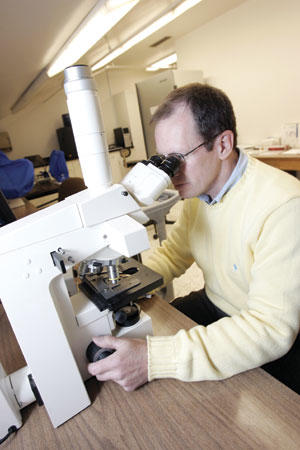 With new equipment allowing improved DNA sequencing research on the TCU campus, students in the College of Science and Engineering will have increased opportunity in the job market upon graduation, said Phil Hartman, professor of biology.The DNA research that used to take weeks, will now take days with the 4300 DNA Analyzer, Hartman said.

“DNA sequencing is an important technique because it was only talked about theoretically,” Hartman said. “Now graduate students will have hands-on experience. This makes our graduates more marketable.”

The equipment allows students to conduct automated research that had been done manually at TCU, or sent to another site.

LI-COR, a company that manufactures environmental and biotechnology equipment, awarded $50,000 through its Genomics Education Matching Fund Program. Michael McCracken, dean of the College of Science and Engineering, contributed the other $50,000 from the college’s funds, Hartman said.

“LI-COR is a supporter of training students with hands-on experiences through inquiry based learning,” said Amy Soden, GEMF program coordinator.

She said the company was proud to add TCU to the list of awardees.

LI-COR is interested in students being trained in genome analysis, McCracken said. They are taking steps to encourage people to understand the techniques involved with using this kind of equipment, he said.

Hartman wrote the grant proposal to LI-COR last semester. The new equipment will assist 1,165 science majors. Genetics, molecular biology, biochemistry and neuroscience are some of the subjects that will be affected by the new equipment, which will be located on the fifth floor of Winton-Scott Science Building.

In the proposal, Hartman wrote that the equipment will not only help undergraduate and graduate participation in research but will also further strengthen the premedical program.

McCracken talked specifically about the effects of the new equipment for biochemistry research.

“If one wants to compare three or four species, you can now look at the biochemical level and characterize differences and similarities,” he said.

The research will give students and faculty a greater insight into the degree of relativity between species, McCracken said.

“DNA sequencing is not new,” he said. “The fact that the machine does most of the work is a new concept.”

It is important that students are exposed to this kind of equipment and understand it because it is a rapidly growing way to research, McCracken said.

Senior biology major Alison Humphrey said: “It’s a big step forward for TCU, both in their research and becoming in line with other universities.