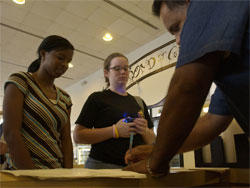 Pond St. Grill management changed in menu and setup to attract more students, especially those who usually eat in The Main or off campus, said Tina Gordon, retail manager for Pond St. Grill.Instead of being styled after a cafeteria, students choose from a menu, pay at the register and then receive a buzzer that tells them when their food is ready.

Legia Abato, marketing manager for TCU Dining Services, said Pond St. Grill was not utilized efficiently because while space and facilities were available, students would not come in.

Abato also said late-night transportation will operate between the Brown-Lupton Student Center and Worth Hills every 15 minutes until 10 p.m. to solve the problem of students not wanting to walk from the Main Campus to Worth Hills.

This year students will order from a menu that includes three main appetizers, four salads, four burgers and five entrÂes with sides.

Once students place their orders and pay with their TCU ID or cash, they will receive a buzzer and wait to be paged or watch their food being made by trained chefs.

“Cooks were specifically hired for the job based on culinary expertise and personality,” said Richard Flores, general manager for Sodexho Campus Services.

Flores also said chefs had to be able to smile and show confidence as they prepared the meals.

Prices have slightly increased from last year’s menu depending on the entrÂe. Megan Smith, a sophomore business and finance major, said she does not mind the price increase because fries are now included with the entrÂes.

Pond St. Grill is the only place on campus that gives free refills, the opportunity to build brownie sundaes and have fried eggs prepared in any style, Flores said.

Waiting time is longer now that the food is made when it is ordered, but sophomore nutrition major Cara Stephen said she thinks that once the process of ordering is worked out, it will be more efficient.

Dan Lienemann, a senior international finance and accounting major, said, “This is one of the best things they have done to this area.