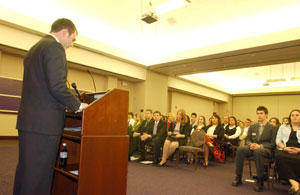 The 2006 student-body officers were inaugurated Tuesday night in the Kelly Alumni Center at the 92nd annual SGA Officer Inauguration.About 100 people were in attendance to see student body officers, and members of the House of Representatives, Programing Council and Judicial Board sworn in by Chief Justice Neal M. Jackson.

“The rewards for your work will outweigh any challenges you will face over the next year,” he said. “Always focus on constant and never ending improvement.”

Newly inaugurated President Trevor Heaney said his personal goals for the upcoming year include an on-campus, 24-hour study area, print stations in all residence halls, increasing the retention rate of the university and setting up and implementing a student-run honor system.

“All of these concerns have been voiced over the past few years and we are all dedicated to making these changes happen,” he said.

“We are already planning a cosponsored event with fraternity and sorority life to take place during a Horned Frog baseball game this season,” he said.

Guest speaker, Dan Short, dean of the School of Business, discussed the changing face of leadership with the officers.

Short said it is time to move away from the hierarchical organization where there is an all-empowered leader.

“I find that this is very much of an archaic model,” he said. “The notion of one all-knowing, all-wise leader is simply not feasible in today’s world. In my judgment, the day of the lone ranger is gone.”

Leaders who are successful, Short said, have contagious passion.

“If you don’t feel that enthusiasm on the inside you’re simply doing the wrong thing,” he said.

In closing, Short encouraged the new officers to ask themselves one question every day, “What did I do to make a difference?