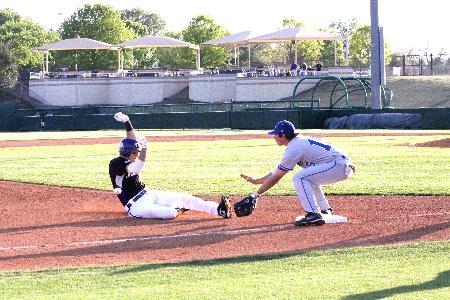 A close game against crosstown rival UT-Arlington became heated late Wednesday night when a scuffle broke out in the eighth inning and both teams rushed the field. One player was ejected from each team, but the Horned Frogs went on to win 2-1 in the bottom of the ninth.

The Horned Frogs improved to 16-9 with the win, their second against the Mavericks this season.

Sophomore Greg Holle had an outstanding performance, going seven and two-thirds innings and giving up only one run on three hits.

Senior outfielder Chris Ellington stretched his hit streak to 10 games with a double to right field in the bottom of the fourth.

The Horned Frogs scored in the sixth when senior second baseman Ben Carruthers scored on a Matt Carpenter grounder up the middle.

The game was delayed for a few minutes late in the night when, with two outs in the top of the eighth in a tie ballgame, UTA junior Tim Steggall ran home on an infield hit but was stopped by a collision with catcher Bryan Holaday that ended the inning. The players exchanged words, and although no punches were thrown, both teams rushed home plate. The dust up lead to both Holaday and Steggall being ejected.

Sophomore reliever Trent Appleby held off the Mavericks in the top of the ninth, though, giving the Horned Frogs a last chance to win the game.

The Horned Frogs began the ninth in dramatic fashion – swinging away. Freshman shortstop Taylor Featherston led off with a base hit to right, followed by a Carpenter sacrifice bunt. An off-balance throw to second by the Mavericks advanced Featherston to third.

Ellington stepped up to the plate but was walked to load the bases. That gave sophomore catcher Jim Pharr, who was filling in for the ejected Holaday, a chance to win the game.

Pharr flied out to left, but with no outs it was enough to bring Featherston home to give the Horned Frogs the walk-off win.

Featherston said he thought the fight in the eighth gave the Horned Frogs the momentum to come back in the ninth, and may give them motivation for the rest of the season.

“After that whole ordeal broke out, I think it sparks you a little bit,” he said. “That really can change a season around, and I think that’s what it’s going to do.”

“We had the best practice we’ve had probably in two years here Monday,” he said. “I think that really helped Carruthers, really helped Featherston.”

This was the fourth game of a seven-game home stand for the Horned Frogs. Their next game will be Friday when they host the conference-leading New Mexico Lobos in a three game series. They will then go on the road to play Texas and UT-Pan American before returning home for a game against Texas Tech on April 13.