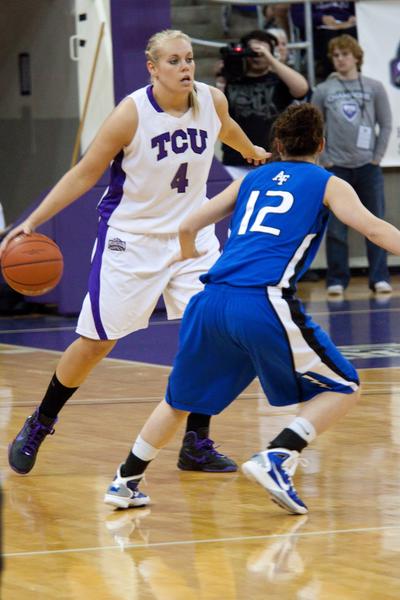 No. 2 seeded TCU is set to begin Mountain West Conference Tournament play Friday when the Lady Frogs take on No. 7 New Mexico in the semifinal round today at 4:30 p.m. The Frogs’ regular season performance of 21 wins and nine losses earned the team the No. 2 seed as well as a bye into the semifinals. The winner of the tournament automatically advances to the NCAA Tournament. TCU’s performance will go a long way in determining whether or not the Frogs receive an invitation to the NCAA’s.

The Horned Frogs capped a 13-3 conference season by winning their final three games. TCU lost only one game at home in conference this season, going 7-1. This was the eighth straight season that the squad has finished in the top three in conference play. In addition to playing for the basketball program’s first MWC Tournament title, TCU is attempting to make the NCAA Tournament for the 10th time in 11 seasons. The Lady Frogs have reached the semifinals three times over the last five years and owns a 2-5 tournament record. Last season, the Frogs lost 69-57 to Utah in the semifinals.

“We wanted to stay in Vegas,” said Lobos coach Don Flanagan in a UNM Athletics release after UNM eliminated No. 3 seeded Wyoming. “We love Vegas.”

While New Mexico sits four games below .500, the Lobos are riding a three-game winning streak and defeated the Aztecs and Cowgirls in tournament play after being swept by both teams in the regular season. TCU split the regular season match-up with UNM 8212; TCU defeated UNM 84-71 Feb. 26 in the Pit while the Lobos ran past the Frogs 65-54 at Daniel-Meyer Coliseum Jan. 26. It was UNM’s first conference win of the season and TCU’s first conference loss 8212; the Lady Frogs shot 9.1 percent in the first half and 27.3 percent overall in a loss which snapped a season-best eight game win-streak.

The Lobos lead the all-time series 9-8 but the Frogs have won three of the last five meetings.

Seven current Frogs have played in the tournament before, led by senior Emily Carter and guard/forward Helena Sverrisdottir with four appearances apiece. Sverrisdottir is averaging 11.5 points and 6.5 rebounds a game in tournament play, including a 16 point, 13 board performance in 2009 against UNLV. Sverrisdottir, an Iceland native who has been nicknamed “Ice” by teammates and coaches, is the only Lady Frog in program history to have over 1,000 points, 500 rebounds and 500 assists under her belt for her collegiate career. Senior center Micah Garoutte averages 6.6 points per game.

The Lady Frogs performance in the tournament likely will leave a lasting impression on the NCAA Tournament selection committee as TCU strives for a spot in the Big Dance. Winning the tournament will earn the Frogs a coveted automatic bid, but the team can still receive an at-large bid without winning the MWC Tournament. With two wins over AP-25 opponent this season (No. 21 Oklahoma and No. 22 Houston), TCU has the opportunity to pad its resume starting today.

If TCU defeats the Lobos it will continue to the championship round Saturday at 3 p.m. versus the winner of today’s Utah/BYU game. The championship game will be televised on Versus.