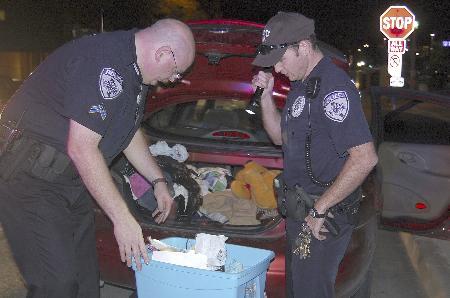 TCU Police detained two men and one woman on suspicion of motor vehicle burglary Monday night, but no arrests were made, a TCU Police official said.

Sgt. Alvin Allcon said TCU police stopped and searched a maroon Ford sedan after a suspected burglary in the parking lot of the Bayard H. Friedman Tennis Center. He said TCU Police were given consent to search the sedan, where police found a laptop that the owner of the burglarized vehicle was able to identify.

The occupants of the car, two men and one woman, were detained in the back of police vehicles, he said. Three children were also in the car, he said.

Allcon declined to disclose any further evidence found in the car or the names of the suspects who were detained.

In spite of the laptop’s presence in the stopped vehicle, Allcon said TCU Police were unable to make an arrest because motor vehicle burglary is a misdemeanor, and in order for an arrest to be made in a misdemeanor crime, an officer must witness the crime taking place.

Allcon said TCU Police will take evidence from the vehicle back to the station and hope an arrest warrant will be issued.

He said although police did find evidence that could lead to an arrest, he is disappointed with the incident’s results.

“I’m kind of frustrated now to be honest,” Allcon said. “We’re getting torn up with vehicle burglaries.”

TCU Police have recently looked into steps such as updating camera technology and unmarked patrol vehicles in hopes of combatting the continuing problem of car burglaries on campus.