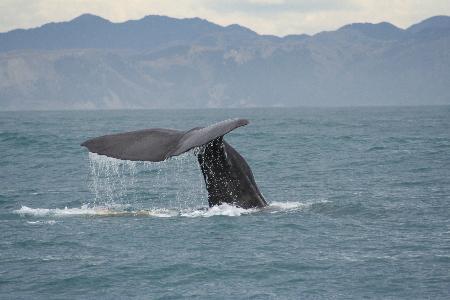 I was recently asked to select a topic for a class. The topic had to be one of which I could gather a considerable amount of information. It had to have some form of controversy, and it had to present a series of viewpoints.

I could have chosen a wildly publicized, political issue like health care, immigration, abortion and the like. Instead, I decided to go a somewhat obscure route and chose the current situation dealing with whaling in Japan. It’s more of an issue than we might think.

Japanese harpoon boats chase whales and utilize ruthless killing tactics in order to perform what they call “scientific research.” Unfortunately, whale meat is a delicacy that can be found in many Japanese gourmet markets, which has demonstrated the true motives behind whaling.

These actions are still taking place despite the fact that commercial whaling was banned in Japan in 1986. That hasn’t kept Japanese whalers from killing nearly 1,000 whales a year.

According to a Los Angeles Times report last February, Japanese whaling boats harvest an estimated 935 minke and 50 fin whales annually. Those numbers pale in comparison to the amount of fish taken from the oceans yearly. But whales are far from fish.

In a column in the Seattle Times, gray whale expert Brenda Peterson provided a convincing reason for protecting the whale population.

“. Whales and dolphins are not just ‘big fish,’ as some pro-whaling Japanese argue; they are highly advanced life forms,” Peterson said. “They sing lullabies to their young, engage in complex family systems, and their communication and navigation skills rival our own.”

Clearly, we’re talking about impressive creatures here. Later in her column, Peterson said humpback whales have even made eye contact with people who have rescued them from fishing nets. Sadly, because these animals can’t communicate with words, they’re being killed off as if they were fish.

If whales could talk, Japanese whalers would hesitate before aiming a harpoon at them and shooting it clear through their bodies multiple times.

Outrageous as it might seem, many animal rights organizations have been less than helpful in the fight to prevent whaling.

In fact, People for the Ethical Treatment of Animals (PETA) – an animal rights organziation with more than 2 million members – has encouraged whaling by instituting campaigns like “Eat the Whales,” which began in 2001. The campaign compares the amount of meat in one whale to the number of animals that must be slaughtered to equal that amount. For instance, 1,200 pigs must be killed to equal the amount of meat in one blue whale.

Either PETA is making light of the issue, or it’s just ignorant. If PETA officials were to do serious research on whale lifestyles, as Peterson did, there would be no such campaigns. Granted, whales are large mammals and have thousands of pounds of meat, but their reproduction process is vastly different than that of a pig.

According to The Vegetarian Society, the average female pig, or sow, gives birth to 22 piglets a year. Whales aren’t quite as fortunate.

A female humpback whale gives birth to a single calf every two to four years, according to the Whale Center of New England. Add to that the fact that humpback whales have an 11- to 12-month gestation period, and the argument dissolves.

PETA’s careless claims exemplify the United States’ activity in the issue. Instead of exercising its power to prevent whaling efforts, the U.S. has decided to compromise. However, the compromise has become more of an excuse.

According to a January report by Los Angeles Times, the U.S. initiated a closed-door negotiation that opened new areas for whaling. The negotiations came after Japan had ignored the restrictions placed upon it when commercial whaling was banned. Essentially, instead of taking a stand against the atrocity, we got bullied and succumbed to Japan’s rule-breaking.

Obviously, the president can’t drop everything and focus on saving whales. I’m not oblivious to our economic situation. All I know is that more can be done. Even when restrictions and guidelines were set in place, Japan continued whaling. We sat back and watched.

If we had issued a treaty with Japan, the Japanese had broken it and their military had attacked us, I don’t think the reaction would have been the same.

Rules are rules, and they need to be implemented when a simple worry becomes a grave issue. If we want to send the message that we could care less about the well-being of this planet, we can sit back and watch the whale massacre.

We can’t afford to do that if we want whale species to endure for generations to come.