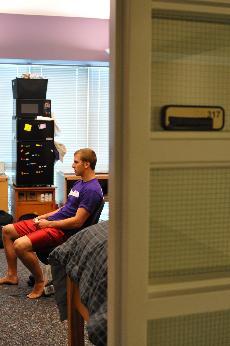 More than 1,800 incoming freshmen are attending the university this year, which is the highest incoming class in the school’s history, a university official said.

Ray Brown, dean of admissions, said the exact number of the incoming class will not be known until the 12th day of the semester, which is the official census date.

“Right now we have about 1,824 (freshmen), but I think we will lose five students between now and the 12th day,” Brown said.

One of the reasons the incoming class grew was the increased admission offers to students because of concerns of the economy’s effect on the freshman class, Brown said. The university accepted more students to maintain a steady number of freshmen who might not come to the school because of financial issues, he said.

“We extended more offers but had more students take us up on those offers,” Brown said.

Brown said that from early on the school knew this was going to happen and started making preparations for more freshmen in May. He said the university had to open up more sections of freshman courses that resulted in the various colleges needing more faculty to keep the student-to-faculty ratio consistent.

Housing also had to work some miracles, he said.

“We let housing know it’s going to be a tough summer,” Brown said. “The housing folks are heroes as far as I’m concerned.”

Craig Allen, director of Residential Services, said his office prepared for the high number of freshmen by turning lounge areas into rooms and creating triple-occupancy rooms in most of the dorms on campus. He said students are also living in other facilities like the GrandMarc.

Freshman music composition and psychology major Iran Roman said he felt uncomfortable in his room in Waits Hall until he recently moved into a double-occupancy room.

“Before yesterday I was living in a lounge with seven people including me,” Roman said. “There were four (bunked) beds and two tables. We didn’t have a closet to put clothes in.”

Elise Christmas, a freshman psychology major, said she is not bothered by the number of students living in Sherley Hall.

Brown said there are record percentages this year as far as minority representation.

“We will set records on blacks, Hispanics, and Native Americans,” Brown said. “We are right at 20 percent (minority poluation). Last year we were at 19.5 percent to 19.6 percent.”

According to the Office of Institutional Research, the previous largest incoming freshman class was 1,652 in 2006.