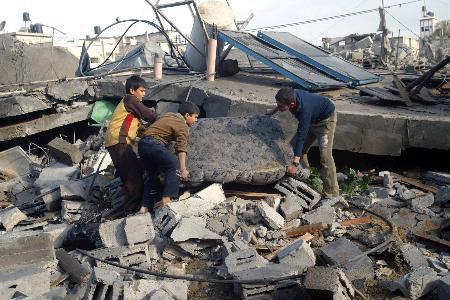 The nights of most Israelis and Palestinians have been punctuated by gunfire and mortar rounds, but there’s a calculated silence coming from Washington.

Only in the past two days has President-elect Barack Obama spoke out about the Israeli operation in Gaza. Critics have argued that Obama has already lost ground with Arabs in future talks by keeping mum for so long.

This might be the foreign-policy test that gaffe-happy Vice President-elect Joe Biden predicted during the campaign.

While the most widely accepted notion is that Hamas brought this on itself by firing rockets into Israel, the debate over the scope of Israel’s reaction and subsequent incursion into the region rages on.

The Israel Defense Forces insist that only Hamas rocket teams are being targeted, but reports about Palestinian civilian casualties are disturbing and uncharacteristic of Israel’s tactics in the past.

In a Jan. 8 Associated Press report, the Red Cross accused Israel of delaying rescue workers access to casualties and the United Nations voted to condemn Israel for targeting Gaza’s infrastructure and civilians.

Israel has also barred international journalists from the Gaza region, providing a smokescreen for what’s really going on.

Some have questioned the timing of the Israeli operation, saying that it coincides with the lame-duck last days of the Bush administration which has always been supportive of Israel.

It’s anyone’s guess how Obama’s brain trust will handle the situation other than support possible peace talks which have so far been rebuffed by Israel. His defense is understandable – it is true that he hasn’t taken office yet. But when he is able to speak for this nation, I can’t help but feel he has already shot himself in the foot with whichever Palestinian political party might be in office by the end of this operation. By not publicly supporting negotiations, it looks as if he sat on his hands and was hesitant to damage his reputation with Israel.

If Obama would have spoken out publicly right away, it wouldn’t have been the first time. He immediately condemned the Mumbai terrorist attacks in November and made clear his plans to ease the economy with tax breaks earlier this month.

But by saying nothing, Obama has said something to Arab critics. Commentators on the Arab television station Al-Jazeera have been consistently critical of him, endangering his mostly positive image in the region.

His silence wasn’t the result of incompetence, but strategy. Obama calculated his response to the crisis because he doesn’t want to alienate either side before he even takes office.

The question remains: Did he wait too long to speak?

With the sun setting on the Bush administration, it’s time for Obama to establish himself as the decisive leader we elected in November.