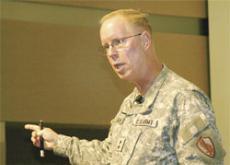 “I gave (the students) an update on the U.S. Central Command and central parts of the global war on terror,” Minetti said.

Minetti explained the current status of Middle Eastern countries such as Iraq, Afghanistan and a region of the Horn of Africa, detailing the responsibilities of CENTCOM, which is the U.S. Central Command. He also spoke to the students about the war in Iraq and the importance of understanding the culture of other countries.

After his presentation, Minetti honored eight cadets who received a full ROTC scholarship to TCU.

The cadets were first contracted with the military, and once they agreed to service in the army as commissioned officers, they received full scholarship, said Maj. John Agor, professor of military defense.

Eiland said he plans to enter the military after graduation.

“I have a minimum of six months for initial branch training and then I’ll be a platoon leader,” Eiland said. “Hopefully, I’ll go somewhere overseas like Korea.”

Although Amy Essary, a freshman early childhood education major and scholarship recipient, said that although she does not plan to enter the Army immediately after college, she said she does plan to utilize the leadership skills she will learn at TCU.

“Because I want to teach second grade, I feel that I’ll learn a lot of leadership skills (in ROTC),” Essary said. “I really do want to join the military, but I haven’t decided how teaching is going to work out. It all depends on how much I enjoy the military once I enlist.”

TCU teaches leadership skills to those entering the military and those who will use their skills in other fields, Agor said.

“Service to the country should be a goal for every American; it doesn’t have to be in the military, it can be anything as divergent as political activism to community service to environmental work,” Agor said. “Everyone should strive to give something back to the country, to the nation, to the world. And this is one way to do it and get your education paid for.