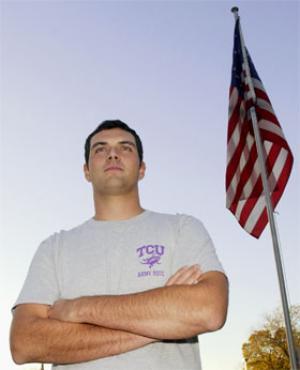 On Dec. 13, a new chapter will begin for graduating military seniors Charlie Jones and Clint Roland.Jones and Roland will be commissioned in a ceremony where they will take an oath as officers for the Army. The ceremony will grant them the rank of second lieutenant. After accepting this leadership position, likely they will be platoon leaders who will lead 20 to 40 soldiers, said Maj. John Agor, department chairman of military science.

“These two gentlemen are more than ready both physically and mentally to face the upcoming challenges they will encounter when they serve our country,” Agor said. “They have been very successful in our program, and I know they will do exceptionally well in the fields of their choice.”

The men will continue training at basic officership leader’s course. They will also have to participate in an in-depth course that will focus on their chosen area of specialty.

“I’m excited to take the next step for preparation, and I’m also looking forward to gaining more experience in the medical field, which I will be a part of,” said Roland, a criminal justice major. “After completing these two courses, I will be prepared to face the real world of the armed forces.”

Agor said after postgraduation courses are complete, Jones and Roland will immediately be assigned to units that will eventually ship out to Iraq or Afghanistan.

“Obviously I am somewhat nervous to head to war, but I feel that I’m ready to face the new ventures that I will come across,” said Jones, a finance and Spanish major. “I’m eager to start in the diverse transportation branch, where I will deal with vehicles, boats, transporting of equipment and several other things. After all, it is my honor to defend our country’s way of life.”

Jones and Roland agree TCU has educated them in remarkable ways.

“I’m proud that I have gained the appropriate knowledge here at TCU, and this university will always be a part of my roots,” Roland said.

Agor said the two have reached the ultimate goal of not only being commissioned, but also earning a degree at the same time. This is something that not many people do, he said.

“Clint will do extremely well in serving our country and soldiers will gravitate to Charlie’s leadership skills,” Agor said. “We wish them the very best, and know that they will do an outstanding job in the U.S. Army.