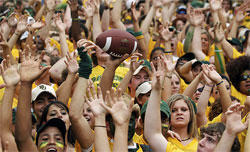 TCU and Baylor may not be in the Southwest Conference anymore, but when these two teams played each other for the first time in 10 years, game attendance peaked an all-time high, said members of Baylor and TCU’s athletics staffs. Sunday’s football game had a total attendance of 42,733 people, said Tamara Metcalfe, assistant director of athletics media relations.

This was the third largest game attendance for a non-conference game in Baylor’s history, said Nick Joos, associate athletic director for communications at Baylor University. It was the largest crowd since 1973 when 46,000 people came to watch Baylor play the University of Oklahoma.

Sean Conner, director of ticket operations at TCU, said he was one of many Horned Frogs at the game, but that the exact number of TCU fans at the game was unavailable.

Joos said attendance was high in part because it was the first game of the season.

It was also “a renewal of rivalries,” Joos said.

Conner said the old rivalry from the Southwest Conference days, the schools’ close proximity to one another, and TCU’s successful season last year attributed to the high attendance.

Metcalfe said Baylor’s head football coach, Guy Morriss, is a TCU graduate, which might have something to do with the high attendance.

Chris Alonzo, a TCU student who attended the game Sunday, said he was excited to be at the game.

“Football is part of college life. I was jumping up and down and riff-ramming,” said Alonzo, a freshman biology major.