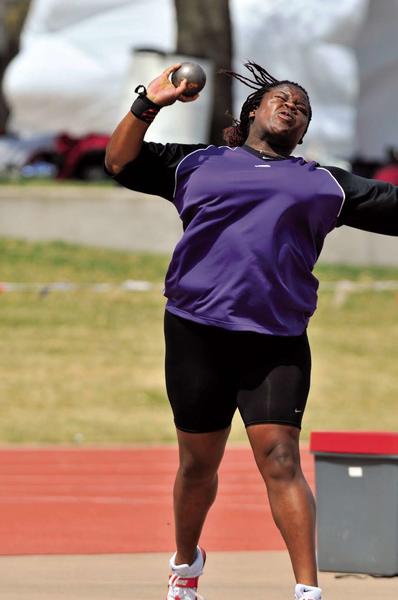 Just one week after participating in the
NCAA Indoor Track and Field National
Championships in Arkansas, the team began
the outdoor portion of its schedule by
hosting the second annual Horned Frog Invitational
March 21.

The Frogs posted 10 NCAA regional qualifying
marks during the event, which featured
competitors from UT-Arlington and
the University of North Texas.
Three of the qualifying marks came during
the men’s 100-meter dash. Junior Otis

Right, sprinter Che Chavez was
named an All-American at the
Indoor Championships in March.
Junior Odis McDonald who finished second in
the Billy Wessels event with a time of 10.49 seconds,
junior Andon Mitchell, who finished third
at 10.5 seconds and junior Justyn Warner,
who finished closely behind Mitchell with a
time of 10.53, all earned spots in the NCAA
regional.

“Anytime you have three kids hit NCAA regional
marks in an event it is a solid day,”
head track and field coach Darryl Anderson
said in an interview on www.gofrogs.com
after the event. “I thought all three of them
ran well.”

Senior sprinter Che Chavez,
who earned All-American
honors at the NCAA Indoor
Championships, earned his
regional qualifying mark by
finishing second in the 400-
meter dash with a time of
46.8 seconds.
In the 200-meter dash,
freshman Mychal Dungey finished second
with a time of 20.85 to get his regional
qualifying spot.
The men’s 4×100-meter relay team, which
consists of Mitchell, McDaniel, Warner
and Dungey, also won a spot in the
NCAA regionals by finishing with a time
of 39.99 seconds.
The women’s side of the Flyin’ Frogs will send
junior Kishelle Paul, who finished the 100-
meter hurdles with a time of 13.76 seconds.

The Flyin’ Frogs earned a total of 14 firstplace
finishes during the event.

Off the track and onto the field, sophomore
Tommy Killen posted a regional qualifying
mark in the discus by throwing a total of
179 feet, 2 inches.

For the women, junior Candis Kelley, who
was the Mountain West Conference Indoor
Champion in shot put, won the shot put
event and earned a spot in the NCAA regional
qualifiers by recording a throw of 48
feet, 4.5 inches.

The team will finish March by competing
in the UT-Arlington/Bobby Lane Arlington
Invitational.

TCU will also host two more events this season,
setting a school record of three events
hosted in a semester.

The TCU Invitational will be April 18-19
and the Mountain West Conference Outdoor
Championships May 14-17, both at
the Lowdon Track and Field Complex.