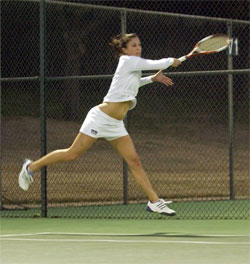 A contest of wills on the Bayard H. Friedman Tennis Center courts took place Tuesday night as the No. 14 Baylor Bears beat the No. 26 Horned Frogs.By no means was the match a pushover for either team as sets went to tiebreakers and both teams worked to outlast each other.

Baylor set the tone for the evening during doubles play quickly disparaging the TCU (4-4) standout duo of Ana Cetnik and Anna Sydorska, 8-2. Action on court 2 followed a similar pattern as Kewa Nichols and Nina Munch-Soegaard were put away 8-5, leaving the duo of junior Andrea Morgado and senior Karine Ionesco to pick up the slack

The Morgado/Ionesco tandem beat Baylor’s Zuzana Zemenova and Jessica Zok 8-5.
Even with the spirits from the one win in doubles, the Horned Frogs were still down 1-0 in team points as singles play approached.

Leading TCU through singles play was Sydorska who dispelled Zok in straight sets with intense play from the baseline and a combination of well-placed drop-shots and deep lobs. Sydorska’s performance was one of the few bright moments against the high-ranking Baylor (5-4) juggernaut as Cetnik could not seem to find a rhythm against senior Zuzana Cerna. Cerna won in straight sets 6-1, 6-3.

During Cetnick’s second set, a glimmer of hope immerged as she broke Cerna’s serve twice, but could not mount more than a two game lead.

Freshman Nina Munch-Soegaard had an exhaustive first set in which she was defeated in a tiebreaker 7-6 (8-6). After being so inches away from a victory over Baylor freshman Lenka Brossova, Munch-Soegaard derailed and was eleminated from the second set with much alacrity, 6-1.

The final match to end the evening was a three set ordeal between TCU junior Kewa Nichols and Baylor freshman Zuzana Chmelarova. Nichols got the victory although the Bears had already clinched the match as a whole. Nichols utilized a powerful forehand to put away the finishing shots in the final tiebreaker.

After the match, TCU found itself on the losing end of a 5-2 match score, but there is hope as the Horned Frogs will face the unranked Oklahoma Sooners on Thursday in Norman, Okla.