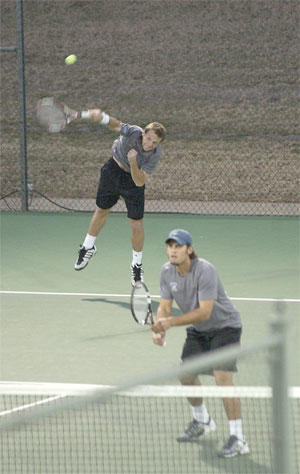 The TCU men’s tennis team, ranked No. 42 in the Intercollegiate Tennis Association’s rankings, beat the University of Texas at Arlington 5-2 Wednesday. The Horned Frogs, which improved their season record to 2-0, is now 14-1 all-time against the Mavericks.

The Frogs swept the doubles matches. Seniors Rafael Abreu and Jacopo Tezza won the No. 1 match by a score of 8-6 and the No. 2 senior/freshman combination of Jordan Freitas and Kriegler Brink finished 8-4. Freshman Cosmin Cotet and junior Radu Barbu brought up the rear with a strong 8-2 victory.

The Horned Frogs took four of their six singles matches; only Cotet and fellow freshman Andrei Mlendea failed to come away with a victory. Despite Mlendea’s loss, head coach Joey Rive’ said he has “tremendous potential” in singles play.

Abreu, Tezza, Brink, and Freitas all won their singles matches.

Abreu handled his opponent by a score of 6-2, 6-2. Abreu said he felt “relaxed” coming into the match and when serving, he sliced some, put some down the middle and some toward the opponent’s body.

Tezza overcame cramps to win a three-set match in a tiebreaker. He said he drank plenty of fluids on his way to getting back in the match.

Tezza said the team is taking their goals slowly.

“Match by match, one match at a time,” Tezza said.

Rive’ said he saw improvement from the men’s Jan. 28 victory over Texas A&M at Corpus Christi. He said doubles play was better, especially the pairing of Abreu and Kriegler, and that Freitas also showed positives.

TCU’s next match is Feb. 17 against Texas Tech.