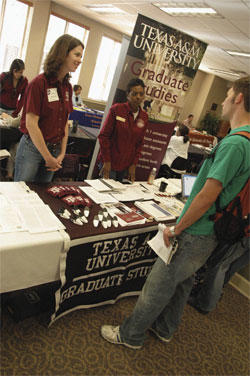 Junior and senior students came to the Student Center Lounge Tuesday to participate in Graduate Professional School Day where 30 other university graduate programs from around the nation came to promote their graduate programs to TCU students.Ann Reynolds, director of Career Services, said she hoped this event would make students aware of opportunities associated with graduate school, but said the university hopes students stay at TCU.

“This event is intended to expose them to different opportunities,” Reynolds said. “They may be eligible to scholarships and financial aid at another institution.”

A majority of the schools represented, such as the University of Louisiana, were in regions near Texas. Misty La Cour, assistant director of Recruiting and Graduate Studies at Louisiana said the school actively recruits in North and East Texas.

Amy Wan, a senior nutrition major, said she did not benefit from Graduate Professional School Day.

“It’s not very effective,” she said. “All this was available on the Web sites of each school. I did a little research before I came here so that I would be able to talk to them. It doesn’t seem to have made a difference, but the people are really nice.”

According to the 2005 Cooperative Institutional Research Program for the class of 2009, roughly 42.8 percent of freshmen said they would pursue a master’s degree at any graduate institution. Of those, 23.8 percent said they intended to remain at TCU to continue their graduate studies.