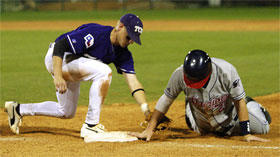 The Horned Frogs employed a revolving door of pitching Tuesday night – and Dallas Baptist walked right through it. No. 21 TCU (6-5) lost 11-8 in a game that saw seven Horned Frog pitchers and a staff total of 11 walks; the struggles from the mound were compounded by the team’s five errors, several of which came off of dropped fly balls in the outfield.

Head coach Jim Schlossnagle said although the players’ effort is there, the results are yet to be seen.

“I thought we competed,” Schlossnagle said. “We have a team full of good players that’s not a very good baseball team right now. We better become one pretty soon … We are so close yet so far.”

Although junior Dillon Farish was tagged with the loss, junior pitcher Omar Arif – who pitched 2.1 innings with only one unearned run on one hit – was the only TCU hurler consistently on the mark.

Despite the loss, Schlossnagle said he is pleased with the performances Arif has turned in this season.

“He’s been pitching lights out,” Schlossnagle said. “He’s done a great job … We need to have about seven or eight guys. I can do it with eight guys – Omar is definitely in those eight.”

The top of the first inning set the tone for the evening – junior Donald Furrow opened the game with a leadoff walk, then sophomore outfielder Matt McGuirk was charged with an error, allowing infielder Cody Montgomery to reach first. After infielder Jeremy Goldschmeding loaded the bases with a single, the Patriots capitalized with a sacrifice fly and a Damian Gomez two-out double to stretch the lead to 3-0.

Dallas Baptist did not allow the game to stay that close for long however, and scored five runs in the seventh top put the Patriots ahead for good. TCU used three pitchers in the inning but could not recover from two early walks, and Goldschmeding recorded his second hit of the night with a bases-clearing double to finish the damage.

Schlossnagle said although he believes the team’s play will improve, an increased focus will have to come along with it.