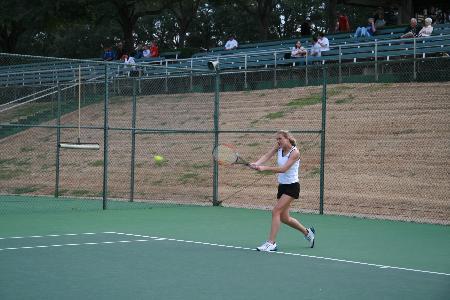 The women’s tennis team takes its six-game winning streak on the road as it continues its Mountain West Conference schedule in Las Vegas today.

The No. 24 Horned Frogs will square off against the University of Nevada, Las Vegas Lady Rebels at noon today and play another 24 hours later against the San Diego State University Aztecs on Saturday, also in Las Vegas.

TCU is currently undefeated in Mountain West play and is tied for the lead with the University of New Mexico with a 3-0 conference record heading into today’s contest.

The Horned Frogs are led by the doubles team of junior Anna Sydorska and Macall Harkins who are 12-2 this season and ranked No. 12 nationally.

UNLV is tied for fourth in the MWC with a 1-1 conference and SDSU is tied for last place at 0-2.

Last season, the Horned Frogs split their two contests against the Runnin’ Rebels, one of only two conference losses for the squad last season.

The loss came in the semifinals of the Mountain West Conference Championships, knocking the Horned Frogs out of the tournament.

After its two weekend matches, TCU will have three more matches, which will all be against conference opponents, before the Mountain West Conference Championships.

The conference championships will be held from April 23 to April 26 in Fort Worth, at the Bayard H. Friedman Tennis Center.