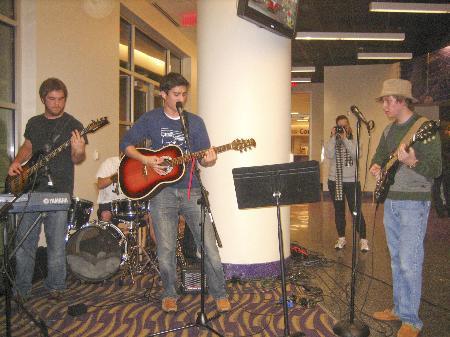 In an effort to give students an alternative to common Thursday night activities, 1873 Cafe & Sports Grill started an open mic night to be held every week, the campus activities director said.

Campus activities adviser Brad Thompson said the open mic night is another means for students to have fun, hang out and listen to live music.

“It’s a simple setup that gives people another option to just going out and doing something they don’t want to do, or something they’ll regret tomorrow,” Thompson said.

James Parker, campus activities director, said performers are being considered for a spot in a university battle-of-the-bands style music contest that will take place at the end of the semester. The process for candidate selection and what they will be competing for will depend on the number of musicians who show interest in performing during the semester, he said.

Thompson said the idea was formed a week before the start of the spring semester, so some details have not been discussed yet.

Whether musicians outside of the student body will be allowed to perform and the exact details surrounding the Battle of the Bands competition are factors that need further discussion, he said. The future of the event depends on the level of interest musicians exhibit and the response the student body offers, Thompson said. Student response will determine factors such as whether the open mic night will eventually encompass other performing acts, extend into other nights of the week or become a recurring event in coming semesters.

Musicians on campus have already shown enthusiasm with the event booked through the next four weeks, Thompson said.

Arlecia Onick, an 1873 staff member, said the dining hall was more full than usual during the band’s performance and student turnout is expected to be enthusiastic. The added aspect of entertainment may have the side effect of increased patrons at 1873 on Thursday nights, she said.