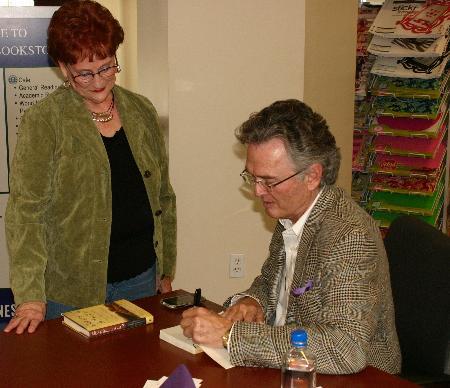 The campus bookstore sold more than 220 copies of the book “What Difference Do it Make?” on Monday afternoon when authors Denver Moore and Ron Hall, an alumnus, held a signing for the newly released title, the bookstore manager said.

Llisa Lewis, general manager of the bookstore, said all in-stock copies of “What Difference Do it Make?” and the authors’ first book, New York Times best seller “Same Kind of Different as Me,” were sold within the first hour and a half of the book signing. TCU Barnes & Noble was forced to purchase more copies of the books from the University Village Barnes & Noble store, Lewis said.

Hall said he was pleased to visit the Fort Worth area since a lot of “Same Kind of Different As Me” takes place close by. He and Moore were introduced by his late wife, Deborah Short Hall, and came together to write these books after her death in November 2000.

The first book told both authors’ biographical stories, how their paths crossed and how they were influenced by God, Hall said.

Moore was a sharecropper in Louisiana, where he lived in plantation-style conditions. He escaped and wandered the streets of Dallas a homeless man. “Same Kind of Different As Me” chronicles the unlikely friendship that bloomed between Moore and the Halls after they meet in the homeless shelter where the couple volunteered.

Hall said the second book is more about Moore’s personal past and readers’ response to the first book.

The hype and press from “Same Kind of Different As Me” has continued to promote the release of the second book, Hall said. Moore and he have not had to coordinate big promotions for “What Difference Do it Make?” because of the continued popularity of the first book, Hall said.

The bookstore could only confirm the book signing two weeks in advance because of the authors’ busy schedule, Lewis said. The bookstore ran an advertisement in the Fort Worth Star-Telegram on Sunday, which informed area residents of the event.

Students and members of the Fort Worth community attended the free event held on the second floor of the bookstore between noon and 2:30 p.m. Monday. Some brought their own copies of Hall and Moore’s books, and others bought copies on site.

When the bookstore ran out of copies, Taylor Witt, event coordinator for the bookstore, offered small cards for the authors to sign, which patrons could then place inside their book after it was purchased.

Hall said he and Moore last visited the campus and bookstore in 2006 for the release of “Same Kind of Different As Me.” Since then, Hall said they have participated in 500 events in 200 cities during the past three years.