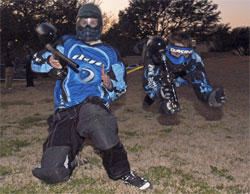 The TCU paintball club team is preparing to outshoot its opponents in the National Collegiate Paintball Association Championship this weekend at Xdrenalin Zone, located on Lake Grapevine.There are no qualifying rules for this tournament; however, only about 30 teams are allowed to sign up on a first-come, first-served basis. TCU will be playing in a division of 28 teams, with the possibility of playing 15-20 games if it wins the tournament.

Paintball at the college level is played with five players from each team on the field at a time. There are currently nine members on TCU’s official roster.

Most people around campus do not know of the new club sport, but it was started by a message sent to TCU Announce asking if people were interested in playing.

Captain Alex Boase said he had started a paintball club in high school and came to college with the intention of starting one as well.

The team’s strategies and game plans vary from field to field, Boase said.

“Generally, we try to identify a key bunker and lock it down,” Boase said. “We try to keep (the other team) out of spots that would give them an advantage. Game strategy also changes as bodies start dropping on either side and people start moving around.”

Boase said it is rare that things will go as planned, however.

“It’s a ridiculously fast-paced game; strategy is tough to execute,” Boase said. “At our level, strategy is more improvised than planned anyway. Even if we plan out the perfect game plan, I can almost guarantee the game will never turn out how we try to predict.”

The club team finds time to practice at Fun on the Run on the weekends. The team is also working toward purchasing its own inflatable bunkers as well as rubber-simulated, reusable paintballs to use inside the Special Events Room at the University Recreation Center.

Boase said it allows the team more convenience in practicing during the week and ensuring the longevity of the team.

“It would cost a lot at first, but in the long run it will actually save us a ton of money,” he said.