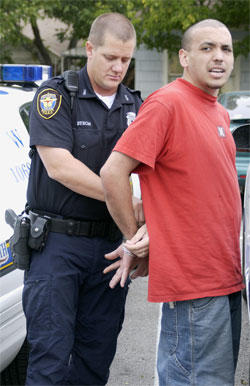 FORTWORTH, Texas — TCU Police are investigating the brother and sister duo arrested on campus Thursday on suspicion of burglary to see if they are related to other unsolved break-ins on campus, Sgt. Kelly Ham said Monday.

Matt Quintanilla, 21, and his sister, Lori Quintanilla, 26, were arrested after they were caught alledgedly attempting to steal a DVD player from a sport utility vehicle parked in front of the ROTC building at about 2:30 p.m. Thursday, police said.

TCU Police, who were aided by the Fort Worth police, also found two DVD players and a digital camera in the Quintanillas’ possession, which police said they believe to be stolen property from an earlier burglary.

Ham said Matt Quintanilla has had previous confrontations with the TCU Police.

“We believe Matt Quintanilla has targeted TCU before,” Ham said. “He was caught trespassing on campus in October of 2003, was issued a warning and then escorted off campus.”

TCU Officer Mike Fazli arrested the Quintanillas after receiving a dispatch call about a suspicious vehicle in the parking lot. Fazli said he discovered Lori Quintanilla and her 3-year-old son sitting in a car parked directly behind a black SUV with a broken window.

Fazli said he found Matt Quintanilla in the back seat holding a DVD player.

Both suspects were charged with burglary of vehicles, and Matt Quintanilla was also charged with criminal trespassing, Ham said.

Lori Quintanilla was able to call family members to pick up her son before she was placed in the back of the police car.

Matt Quintanilla was unusually talkative after his arrest.

“The police need to step up their game,” Matt Quintanilla, who has 17 prior arrests, said. “This is too mother – easy for me.

“I break in to cars all of the time.”

Matt Quintanilla said his family is responsible for 15 to 20 burglaries a week in the TCU area, and a Fort Worth police officer estimated the number was higher.

The siblings were able to post bond over the weekend and were released from jail, said Mansfield Jail officials.

Tamera Danielson, a member of the TCU staff, and the owner of the SUV that was broken into, expressed outrage that the Quintanillas are already out of jail.

“They are probably already back on campus looking for the next car to break in to,” Danielson said. “TCU is going to have to start doing more to protect those who work here.”

TCU Police suggest students and faculty take basic precautions to avoid being targeted by burglars, like locking the doors and hiding valuables.

While being arrested, Matt Quintanilla said students should not lock their doors.

“Locking your doors will only cost you a broken window because I will get what I want either way,” Quintanilla said.