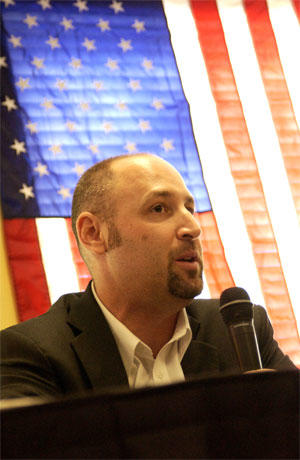 The first step toward achieving a more peaceful society is for adversaries to begin talking and stop fighting, a religion professor and biblical scholar said Monday.The professor, David Gunn, took part in a panel discussion that covered political, social and religious issues surrounding the peace process. The discussion was part of International Week, which aims to raise awareness and encourage students to think globally.

Gunn said he is concerned with how religion relates to violence and the number of people using the Bible to advocate violent causes.

“When you’ve got God on your side, who can argue with you?” Gunn said.

Gunn said discussion is key to easing tensions because once people get to know their enemies, they dislike them less.

Panelist Anthony Nicotera, a lawyer with a background in social work, said he is concerned with the fact that people know the names of movie stars but not those of important peacemakers.

Nicotera said he has worked with adolescents and encouraged them to use different ways to handle conflict.

“Clinical social workers are working with young people in trying to get them to break down barriers, to encourage dialogue and get them away from the us-versus-them mentality,” Nicotera said.

Panelist Jeff Ferrell said the government is declaring war on social problems. The war on drugs is an example of this, because the local governments are making criminals out of nonviolent people. The government should be helping the community work toward social justice without conflict, Ferrell, a criminal justice professor said.

Courtney Goode, a sophomore economics major and president of Peace Action, which hosted the panel along with University Ministries, said she wants students to learn what they can about how to make a positive impact.

“We can’t do anything until we educate ourselves,” said Goode.

Claudia Vaz, a junior finance major and the International Week chair, said she hopes that students will get to know each other in an attempt to resolve conflict.

Part of International Week is exploring and examining what is going on in the world, said the Rev. Angela Kaufman, minister to the university.