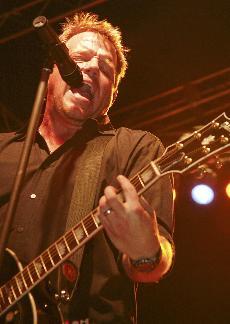 Green showed his newfound TCU spirit entering the stage in the Campus Commons waving Horned Frog hand signs to the sea of students and closing the concert by referring to himself as Pat “Texas Christian University” Green.

“Whatever your dream is, see it through,” Green told the crowd before exiting the stage.

SGA President Thomas Pressly estimated 3,500 students gathered in the Commons to close the grand opening week of the BLUU. Students began settling in the Commons as early as two hours before the show to hear Green and Micky and the Motorcars, the opening act.

Students settled on blankets and camping chairs that spread from the base of the commons at the BLUU half way up the side of King and Samuelson Halls as Micky and the Motorcars came on. Green came on at 9 p.m. and played for almost two hours.

“That was a great way to bring all the students together before the first home game,” said Jodi Prachyl, sophomore early childhood education major. “It really made us all be able to show our school spirit for the new union.”

Green took time to praise the new student union, too.

“You must be proud of this, and I hope that tonight’s party is worthy,” he said.

Crowds spilled over onto the stairwells entering the Commons and onto the balconies of the BLUU. Green worked the crowd between songs, at one point prompting the audience to perform Riff Ram, or as he jokingly referred to it, “something about going to the zoo.”

However, Green is no stranger to the university. He dated a woman who went to TCU while he was in high school and college, and now lives just blocks from the campus.

“I’ve been living in Fort Worth for three years and you’ve made them great,” Green said to the audience.

Several of Green’s songs discuss the time he spent in college at Texas Tech University, namely his single “College” from his “Lucky Ones” album. He cracked several jokes about his alma mater, where he got his start, mentioning that the best concert they provided was “five drunk frat guys” and himself.

“It’s very comfortable for me to play in front of college kids,” Green said. “This is where I got my start; this was all that was important to me when I was becoming a musician.”

Green stayed long after the end of his concert to sign autographs, take pictures and joke with students waiting in line.

Pressly said expectations were shattered with the attendance of the event.

“I think tonight shows that big events really do draw people and we need to focus on those events and cut out some of the smaller events to afford it,” Pressly said. “It’s well worth it when you have that many people come out here and enjoy it.”